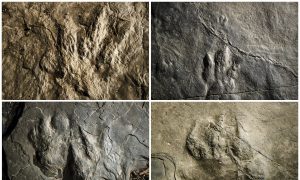 A 115 million-year-old dinosaur footprint has been partially destroyed by vandals.

A leader of a school group discovered the damage to the footprint of a therapod dinosaur last week, according to the BBC.

The footprint is located on a tidal rock platform in Flat Rocks in Victoria, Australia—an area famous for dinosaur fossils.

“It looked like somebody had taken to it with either a hammer or a rock, and had broken off sections of the toes,” Parks Victoria ranger Brian Martin told the BBC.

Broken pieces were scattered around the rock platform, he added.

Discovered in 2006, the footprint is at one of only a handful of polar dinosaur sites in the world.

Rather than remove it, scientists who discovered it decided to leave it there for visitors to enjoy.

Parks Victoria said in a statement: “The significance of the footprint is that it represents a moment frozen in time when a meat-eating dinosaur stood on that spot and left an impression of its foot.

“It is quite disheartening for a site of such significance that attracts hundreds of people every year to the area has been damaged in such a careless manner.”

Therapod dinosaurs were a class of predators in the Jurassic and Cretaceous periods that included the most famous dinosaurs such as Tyrannosaurus Rex and Velociraptor.

Bunurong Environment Centre Education Officer Mike Cleeland said he hoped they would be able to restore the footprint.

“I was able to retrieve some of the broken pieces of the footprint and hopefully the technicians at Museum Victoria may be able to restore the footprint to some degree,” he said in a statement.