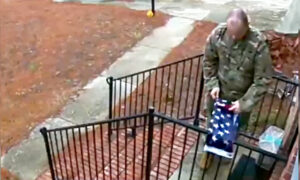 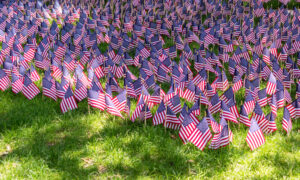 Massachusetts Family Plants Over 8,000 Flags on Front Yard for COVID-19 Deaths in the State
0 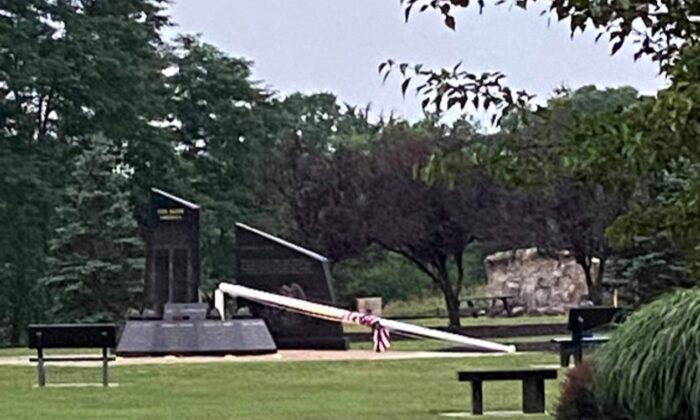 A flagpole at a 9/11 memorial in a New York village was vandalized, police said. (Washingtonville Police Department)
US News

A memorial dedicated to fallen firefighters who died during the Sept. 11, 2001, terrorist attacks was defaced in a village in Orange County, New York, officials said.

Vandals are accused of cutting down a 25-foot-tall flag pole at the Washingtonville 5 Firefighters World Trade Center Memorial. It was also sprayed with graffiti, according to Washingtonville Mayor Joseph Bucco.

“They took the eagle that was on top of the flagpole and they brought it over to the St. Mary’s Parish property where they also did damage to that sign,” Washingtonville Mayor Joseph Bucco told Spectrum News.

The memorial was created in 2002 for five firefighters who died in the terrorist attacks.

“It was like a punch to the stomach,” said Joe Zaccaro, who created the memorial. “I was just so upset and I started getting a bunch of text messages and emails from a lot of people from our town.”

Bucco told News12 that the memorial will be immediately fixed. Cameras will also be installed.

“They picked the wrong village here for this to happen,” he noted.

“It brought tears to my eyes because I lost a lot of friends, and it’s still hurting,” stated Renaldo Robledo, a first responder during the Sept. 11 attacks.

Police are also asking locals to check their surveillance cameras and if anyone saw anything suspicious, they should call the detective division at 845-496-9123.

Officials told the Mid-Hudson News that a Saint Mary’s Parish Center sign was damaged and knocked over. Officials suspect the two incidents are linked.