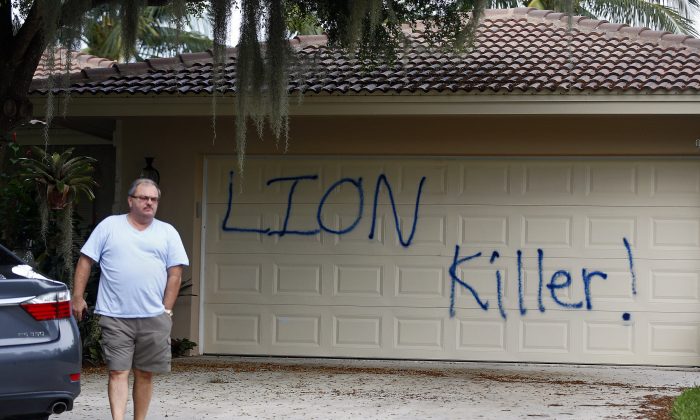 Private Investigator for the Palmer family, Walter Zalisko, of Global Investigative group in Fort Myers walks out of the home Tuesday, Aug. 4, 2015, at the Marco Island home of dentist Walter J. Palmer. Zalisko said no vandalism was found inside. The home was discovered vandalized with the worlds "LION Killer!" and littered with pigs feet drenched in hot sauce. Palmer, a Minnesota resident, is wanted in the killing of Zimbabwe's famous lion, Cecil, a lion who drew thousands of tourists and dollars annually. (Corey Perrine/Naples Daily News via AP)
US

MARCO ISLAND, Fla.—Police in southwest Florida say vandals spray painted the words “lion killer” on the garage door of the vacation home owned by a Minnesota dentist who has been identified as the hunter who killed Cecil the lion in Zimbabwe.

A hand-made sign criticizing Palmer was left in the yard last week. A security company has been hired to protect the property.

Officials in Zimbabwe have said they’ll seek the extradition of Palmer, alleging he lacked authorization to kill Cecil last month. Palmer has said he relied on professional guides to ensure his hunting was legal.