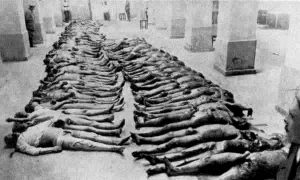 Remember the 100 Million Victims of Communism
0 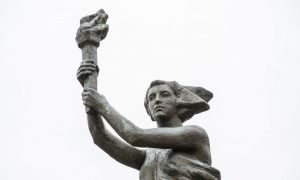 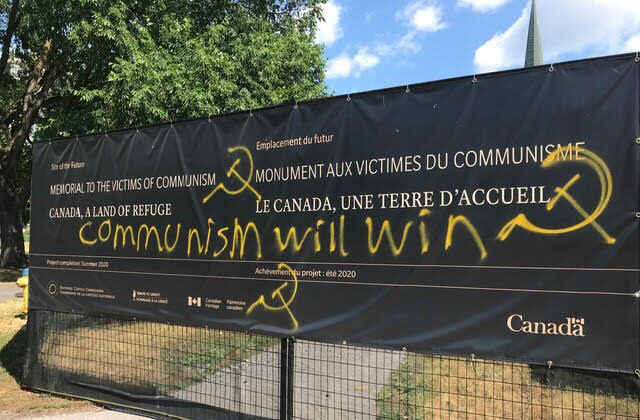 The construction site of Canada’s Memorial to the Victims of Communism in Ottawa was vandalized on July 1. (Provided by Tribute to Liberty)
Canada

A chorus of voices has risen to condemn the vandalism of a site in Ottawa where a memorial to victims of communism is in the process of being built.

On July 1, a large sign at the construction site of the Memorial to the Victims of Communism was spray-painted with “communism will win” and three hammer and sickle symbols.

“Millions of Canadians know firsthand about Communist atrocities, having fled its brutality & oppression to find refuge in Canada. Communism has taken the lives of over 100 million around the world. We must always remember its victims. Ignorant vandalism like this is unacceptable,” Conservative Leader Andrew Scheer tweeted.

Alberta premier Jason Kenny tweeted that “An estimated 100 million people have been murdered by Communist regimes. Hundreds of thousands of refugees from Communism fled to freedom in Canada. It’s appalling to see their experience mocked at this site of collective memory.”

The memorial, which was expected to be completed this summer but has been delayed due to the pandemic, is being built in memory of those who suffered and died under the yoke of communism worldwide, and to commemorate Canada as a refuge for those fleeing totalitarian communist regimes.

“Under the control of the tyranny of the Chinese Communist Party, it should actually be treated as a special form of war, and it is more terrifying than war, because they have never stopped killing, and it is completely unequal. In a war there are usually two sides that can confront each other, but people under communist tyranny have no conditions, no ability, no means to fight back.”

Tribute to Liberty, the charity spearheading the project, says on its website that the memorial “will serve as a public reminder of the millions of victims of Communism, and will bring the suffering of these victims into the public’s consciousness.”

Tribute to Liberty treasurer Alide Forstmanis said he believes the spray-painting incident is part of the recent trend to deface or topple monuments and statues across North America.

“What’s happening in the U.S. you can see with toppling of entities, is [also] facing all the statues here in Canada. It’s very sad that they do this,” Forstmanis said in an interview.

There have been calls for removing statues of first prime minister John A. Macdonald and other figures who played a role in the development of Canada as a country. The trend has gone beyond historical monuments, however. Last week in Calgary, statues to honour police and firefighters were vandalized by being splashed with paint.

U.S. President Donald Trump announced on June 26 that he has signed an executive order aimed at protecting the country’s monuments, memorials, and statues.

“I just had the privilege of signing a very strong Executive Order protecting American Monuments, Memorials, and Statues—and combatting recent Criminal Violence. Long prison terms for these lawless acts against our Great Country!” the president said on Twitter.

The order says the federal government will prosecute “to the fullest extent under the law” anyone who incites violence and illegal activity, which includes the damaging of monuments, memorials, or statues.

The Veterans’ Memorial Preservation and Recognition Act of 2003 authorizes a penalty of up to 10 years imprisonment for destroying or attempting to destroy monuments commemorating those who served in the U.S. armed forces.

“Left-wing extremists are rioting, looting, and calling for the destruction of the United States system of government,” says a White House statement announcing the executive order.

“Through mob intimidation, these violent extremists are attempting to impose their ideology on the law-abiding citizens of this country. Some state and local governments are failing their citizens by not distinguishing between peaceful protest and violent chaos.”

The executive order says federal support may be withdrawn from state and local law enforcement agencies that fail to protect monuments, memorials, and statues.

The White House statement noted that rioters have torn down and defaced statues representing notable figures across the nation, including statues of founding fathers George Washington and Thomas Jefferson in Portland, a statue of Ulysses S. Grant in San Francisco, and a statue of Hans Christian Heg, who died fighting for the Union Army during the civil war, in Wisconsin.

“These monuments memorialize the history we all share as Americans, and they deserve to be defended for future generations,” reads the statement.

Last week, Boston officials voted to remove a statue that shows former President Abraham Lincoln and a freed slave who is breaking free from his chains.

Earlier on June 21 New York City announced that the statue of Theodore Roosevelt by the entrance to the American Museum of Natural History in New York City would be removed.