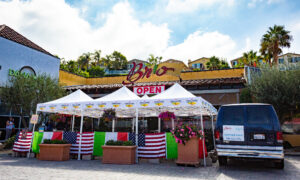 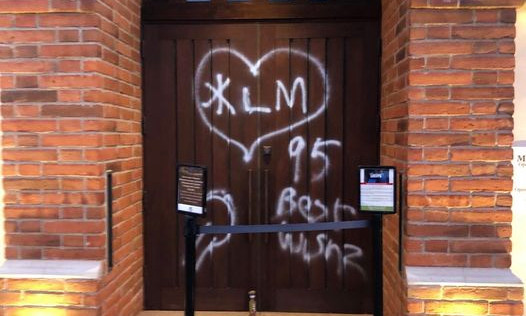 Rather than letting vandalism at the historic Mission San Juan Capistrano bring the community down, it instead used the crime as an opportunity to come together.

The 244-year-old Mission’s door was tagged with a heart containing an indecipherable message, and “95 best wishz,” (sic) between the evening of Dec. 10 and early Dec. 11. Supporters of the local Southern California landmark responded by donating money to help fund maintenance and surveillance.

The graffiti has since been cleaned up.

The mission’s executive director, Mechelle Lawrence-Adams, described the act of vandalism as frustrating.

“It’s been a rough year for everybody, and it was just one more thing,” Lawrence-Adams told The Epoch Times. “A salt-in-the-wound kind of thing. It was just so senseless and not meaningful.”

Lawrence-Adams initially posted a photo of the vandalism on her personal Facebook page. After receiving multiple responses, she shared the image on the Mission’s Facebook page, alongside a plea for donations.

It had already been a tough year for the chapel; it was forced to halt many of its offerings due to the state-mandated stay-at-home order.

Many people, upset with the vandalism, showed their support for the center Dec. 12 and Dec. 13 by making donations and shopping at the Mission’s on-site store.

Lawrence-Adams was “shocked” to see so much support from the community, as the situation quickly turned from a “negative into a positive.”

“It was unbelievable. They called. I’ve gotten a lot of emails from people, just really positive,” Lawrence-Adams said. “The community was really great. I feel like we kind of had our ‘Wonderful Life’ moment. A lot of people stepped up to help us out.

“The Mission means so much, whether you’re Catholic or not,” she continued. “The community at large sees Mission San Juan as a really special place. It’s painful to see something like that be defaced in a senseless way. People are really craving traditions and the closeness [that Christmastime brings]. There’s still a lot of good in humanity, despite what you might think otherwise. It’s an opportunity that I did not see coming.”

Mission San Juan Capistrano was founded in November 1776 by Junipero Serra, according to its website. It was the seventh of 21 missions established in California by the Spanish.