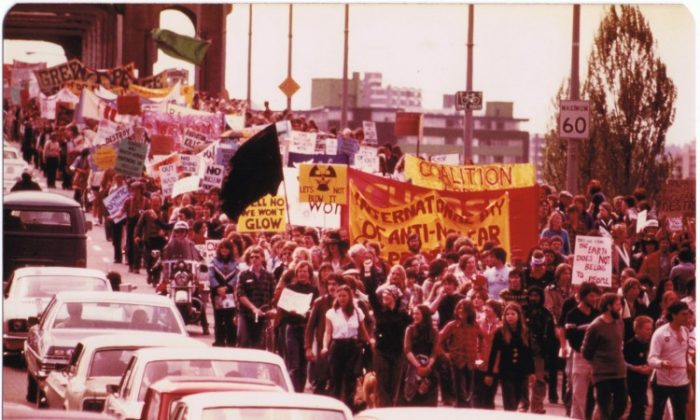 It was 30 years ago this month that Joseph Roberts organized Vancouver’s first Walk for Peace. It drew 35,000 people and inspired similar events in Toronto, Victoria, and Halifax. Momentum grew, and by the third year 100,000 participants turned out for the Vancouver walk.

The event is expected to attract everyone from environmentalists and religious organizations to unionists and residents, as well as many who took part in the first walk.

We need to realize that peace is the best investment. War is never a good investment.

“The vast majority of people in Canada are for peace,” says Roberts.

“They don’t want half a trillion dollars spent on F-35s and war boats. They want that money spent on education and health and making this country a better place for Canadians, for the people who live here, and so we can welcome people from other places as well. We need to realize that peace is the best investment. War is never a good investment.”

Invited guests include David Suzuki and Sarah McLachlan, with performances by the band Peace in the City and 11-year-old First Nations singer Ta’Kaiya Blaney.

Veterans will lead a ceremony to lay a wreath for peace. There will also be a presentation on the history of the peace symbol which was created in 1958 and is based on the semaphore signals ND for nuclear disarmament.

Back in the ’70s, Roberts was involved with the Canadian Coalition for Nuclear Responsibility, and in 1976 during a UN conference he signed a petition calling for an inquiry into all aspects of the nuclear fuel cycle.

He attended meetings on the issue, which he soon began chairing. His involvement inspired him to create the Walk for Peace.

Roberts says the threat posed by nuclear weapons has only increased with advances in technology, while the world is no safer.

“The bombs we have now are 10 to 100 to 1,000 times more powerful. One Trident submarine can wipe out 50 to 100 major cities in the world within half an hour at the push of a button. We have more nuclear weapons now than we did 30 years ago in 1982. So are we safer? No. People just aren’t thinking about it.”

The key to avoiding possible nuclear annihilation is for people to learn to live together, he says.

Roberts notes the importance of the use of language in relation to peace. He suggests that statements like “the war on poverty” or “conquering cancer” frame activist movements as battles and are not the best approach to achieving peace. Participants in the Vancouver event will not be “marching” but will be “walking” for peace.

He believes peace can be achieved by being peaceful within oneself and then sharing peace with the wider world. He says learning to be peaceful is similar to learning any other skill such as dancing or Tai Chi.

“If you get enough people feeling that space that peace exists in—whether you call it the presence or the holy spirit, divine—that place where we are in touch with our deepest and most beautiful selves and we share that with other people, [then] life becomes a joy.”

The Walk for Peace will end with a meditation or prayer for peace, and people will be encouraged to “walk their peace home.”

Melissa Shaw is a journalism student living in Toronto.