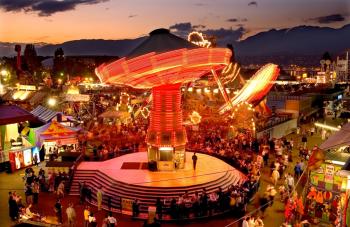 Joan Delaney
Senior Editor, Canadian Edition
Joan Delaney is Senior Editor of the Canadian edition of The Epoch Times based in Toronto. She has been with The Epoch Times in various roles since 2004.
View profile
Follow
biggersmaller
Print
Fondly referred to as “the PNE” by Vancouverites, the Pacific National Exhibition is a fair like no other. Much more than just rides — and what rides! — the PNE serves up a cornucopia of entertainment.

Beginning 92 years ago as a five-day agricultural and industrial exhibition in Hastings Park, the PNE has grown dramatically in the years since and now has over 700 attractions, shows and events.

While it operates all year, the summer months when Playland and the Fair are running are by far the PNE’s busiest. The Fair alone, which runs for 17 days, attracts close to 1 million people.

The Fair includes events such as the Lumberjack Show (which has axe throwing, wood chopping and spar pole climbing competitions), Superdogs, the Jungle Book, the Flying Canucks and the award-winning Rollin’Thunder.

One of the biggest crowd pleasers at the Fair is a show called the Peking Acrobats, says Fair president and CEO Mike McDaniel.

“This is a group we got last year and they’re back this year with a brand new show. There are four shows a day and every show is full. It’s an amazing world class show.”

The fair also has agriculture, exhibits, sports, live shows and the Summer Night Concert Series, which this year features Billy Ray Cyrus, Trooper, Spirit of the West, Sass Jordan and an Evening with Elvis, among others.

Playland has about 50 rides in the summer months — rides with scary names such as Corkscrew, Gladiator, Flume, Hellevator, Pirate and Wave Swinger. One of the most extreme rides is Revelation which is designed like a giant airplane propeller and seems to move just as fast.

“I can say with some confidence that I probably will never ride that one,” says McDaniel. “I lost my will for those extreme rides more than a decade ago. I like the roller coaster though.”

“It’s a very famous ride and our most popular ride. We have about half a million people who ride that every year and this year obviously it’s a special year.”

The second biggest fair in Canada (after the Canadian National exhibition in Toronto), the PNE hires a total of about 3,800 staff, 2,500 of whom are between the ages of 15 and 24, making it the largest employer of youth in B.C.

“The type of business we are in is very active and very lively and from that standpoint we draw a lot of young people as our guests as well as our staff. Because of the seasonality of it we draw college, university and high school students in summer,” says McDaniel.

Every year on the day after the last day of the Fair, a draw takes place to find the winner of the grand prize, which this year is a 3,000 square foot “coastal cottage inspired” home in Gibsons on B.C.’s Sunshine Coast.

But once the Fair ends and the kids go back to school, the fun isn’t over. Throughout fall and winter, besides Playland the PNE has junior hockey in the 16,000-foot arena, community programs, kids’ programs, concerts, festivals and even the odd film shoot.