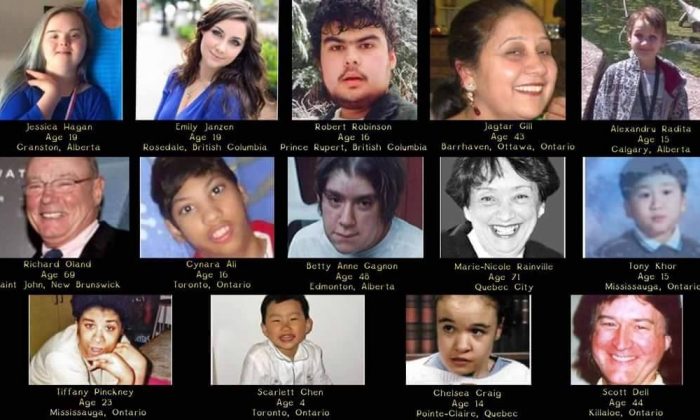 Some of the 700 people with disabilities who were murdered by relatives or caregivers over the last 35 years. (Autistic Self Advocacy Network)
Canada

As part of the International Disability Day of Mourning, disability rights advocates in the Vancouver area will be holding a vigil on March I to honour the lives of disabled people murdered by their caretakers.

The Autistic Self Advocacy Network (ASAN), which tracks these cases, has compiled a list of over 700 reported murders of people with disabilities by relatives or caregivers over the last 35 years, although the total number is thought to be even higher. The vigil’s intention is to address violence against people with disabilities and speak out against the prejudice that says a disabled life is not worth living.

ASAN held the first Day of Mourning in 2012 as a response to the murder of George Hodgins, a 22-year-old autistic man from California, by his mother. ASAN has continued to organize the event each year, partnering with other disability rights groups including Not Dead Yet, the National Council on Independent Living, the Disability Rights Education & Defense Fund, ADAPT, and the American Association of People with Disabilities.

The Day of Mourning is an international event, with 20-30 participating cities each year.

Little public attention is paid to the disabled victims of these violent acts. Media coverage and public discourse about such killings frequently justifies them as “understandable” and sometimes “merciful,” rather than appropriately condemning these crimes and those who commit them.

The Disability Day of Mourning is a time for the disability community to commemorate the many lives cut short. By honouring disabled victims of murder and celebrating the lives that they lived, these vigils send a message that disability is not a justification for violence.

Speakers at the vigil, which starts at 5 p.m., will include Sam McCulligh, autistic activist and head of the Vancouver ASAN chapter; Amythest Schaber, autistic activist, blogger, and public speaker; and Norm Kunc, disability advocate, counsellor, and presenter.