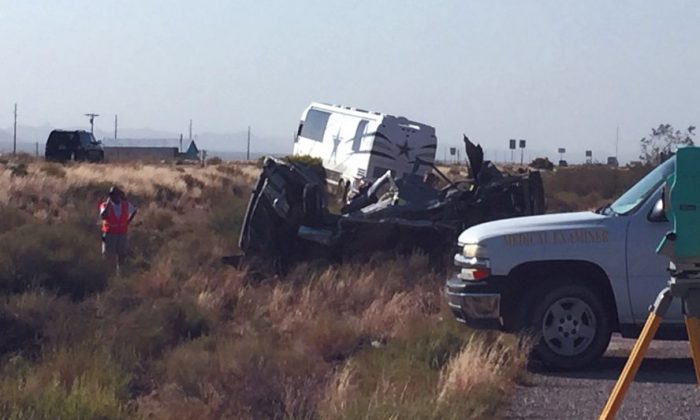 The scene of a bus crash is surveyed Sunday, July 24, 2016, on a highway in northwestern Arizona, about 30 miles north of Kingman. A Dallas Cowboys bus collided with another vehicle and authorities say at least one person was killed. Team spokesman Rich Dalrymple confirmed a Cowboys bus was one of two vehicles involved in the crash Sunday on U.S. 93. (Cody Davis/Kingman Daily Miner via AP)
NFL

PHOENIX  — Four people died when their van turned left at a highway intersection in northwestern Arizona and collided with a bus carrying staffers but no players of the Dallas Cowboys football team, authorities said Monday.

The vehicles heading in opposite directions Sunday on the main route between Las Vegas and Phoenix crashed as the van turned across U.S. 93 and onto a road, the Arizona Department of Public Safety said.

DPS spokesman Quentin Mehr said three females and one male in the van died, but he didn’t release their ages or names pending notification of relatives.

Nobody on the Cowboys bus was seriously injured, and the team said no players were on board. The group was headed for Las Vegas for a planned stop on a pre-season promotional tour.

“All on the bus came through OK with some bumps and bruises,” Cowboys spokesman Rich Dalrymple said in an email.

Additional information on the crash about 30 miles (48 kilometers) north of Kingman was not immediately available. The bus was seemingly intact and sitting upright in a field afterward, while the van appeared reduced to wreckage.

Mickey Spagnola, a columnist for the team’s website, has been writing for the past week about traveling on a Cowboys bus with a driver, the team mascot and videographer. On his Twitter page, Spagnola tweeted before 2 p.m. Sunday that the bus was 80 miles (129 kilometers) outside Vegas.

The bus was on its way to a Cowboys event with 50 to 75 fans set for the afternoon, said Charles Cooper, manager of GameWorks entertainment center in Vegas.

People were waiting when the president of a local Cowboys fan club called about the accident. The event, which was supposed to feature the team mascot, was canceled, Cooper said.

After the Las Vegas stop, the bus was scheduled to go to Oxnard, California, for the team’s training camp. Members of the organization typically take a bus two weeks before camp starts and make stops along the way.