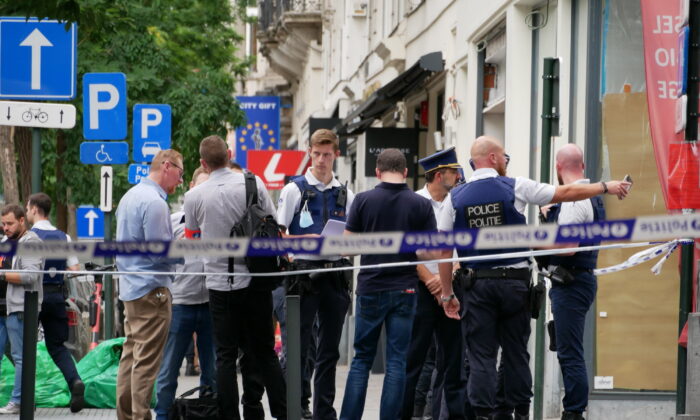 Police cordon off an area in the center of Brussels after an incident in which a van hit a terrace in Brussels on Aug. 26, 2022. (Sylvain Plazy/AP Photo)
Europe

BRUSSELS—Police detained a suspect after a speeding van clipped a sidewalk terrace in the center of Brussels and slightly injured at least three people Friday.

The van’s driver rode off after running into the some tables, said Willemien Baert, a spokesperson for the Brussels prosecutor’s office. “We are still assessing several possible motives,” she said.

“The facts remind us of attacks such as we have seen abroad. But this is not the only motive we are looking at,” Baert said, adding that it could have been an accident.

“A number of people were very slightly injured and were treated on site without having to go to hospital,” Baert told reporters.

Security camera pictures showed the white van driving through a narrow side alley of the Rue Neuve shopping street and clipping, rather than driving into, a few tables as people scattered to safety.

“We are in close contact with our security services and are following this from close by,” Belgian Interior Minister Annelies Verlinden said.