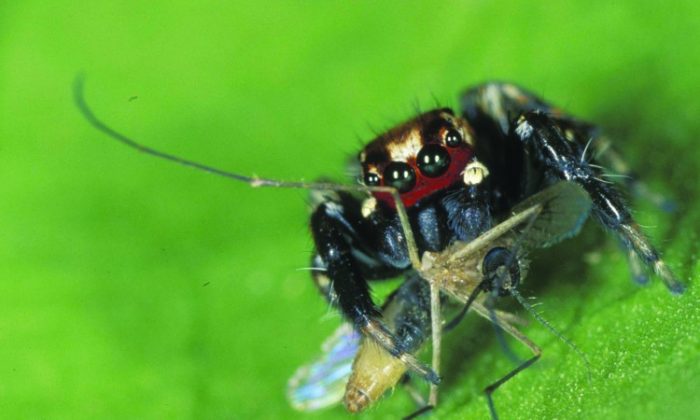 A Kenyan species of jumping spider, Evarcha culicivora, prefers snacking on engorged female Anopheles mosquitoes and detects them via visual cues relating to its prey’s antennae.

Also known as vampire spiders, they mainly feed on insects, favoring mosquitoes that have recently dined on blood.

“You can see from the diet when you find them in the field that there is a high number of mosquitoes in what they eat,” said study co-author Ximena Nelson at New Zealand’s University of Canterbury in a press release.

The spiders are relying on various visual information to distinguish their favorite food, particularly the simpler antennae of female mossies compared to the fluffy ones of males.

“The bodies of Anopheles mosquitoes rest on a 45 degree angle from the substrate but most others rest parallel,” Nelson said.

“Obviously, blood-fed females have an engorged red abdomen and the other difference that comes to mind between males and females is the antennae.”

Nelson’s team created hybrid mosquitoes by sticking the head of one to the abdomen of another, such as male antennae on a blood-fed female’s abdomen. They then positioned these various Frankenstein at the correct angle to test out which ones the spiders preferred.

“The great thing about jumping spiders is they’re very decisive,” Nelson said, noting that blood-fed females are even preferred over females engorged with transparent sugar solution.

This means that antenna appearance is a cue, along with a blood engorged abdomen.

“The thing that really amazed me is that I couldn’t actually see the difference when I was looking at the screen,” Nelson said.

The findings were published in the Journal of Experimental Biology on June 7.