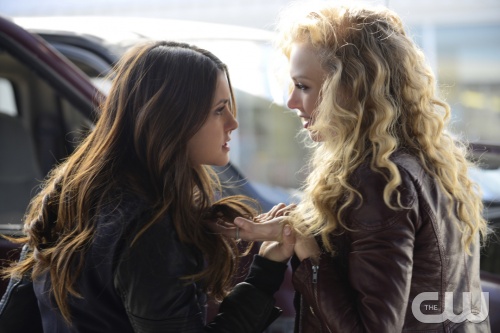 Elena, left, could turn into a villain in The Vampire Diaries season 6. (Guy D'Alema/The CW)
Entertainment

The Vampire Diaries season 6 is coming up next and fans are wondering which character(s) will be the villain(s) in the upcoming season.

Particularly because some people weren’t impressed with the villains in season 5.

Wetpaint speculates that prime options for villainry are Enzo, Elena, Katherine, and Tess.

Enzo could become a true villain following Damon’s death and the pain still surrounding Maggie’s send Enzo into another tailspain. But the site notes that he might not have “the proper motivition” to turn into a bad guy.

As for Elena, she would be more impacted by the deaths of Damon and Bonnie, prompting her to turn dark.

Katherine was sucked into “some Vortex of Doom and is gone forever” but she “does make such a good villain,” so maybe she’ll be back?

Tessa was absent during the collapse of the Other Side, and could have escaped before the collapse. She may reappear as a villain.

”He could go light, he could go dark, he could go pure, he could lose his mind and get on a motorcycle and drive to Miami. So what he ultimately ends up doing will be an interesting reflection on his state of mind at the moment — and very fun for Paul [Wesley] to play.”

“TVD hasn’t had the best luck with the new character villains as of late, but we have enough faith that this show still knows how to create a badass, compelling villain to give it a break about the whole Markos thing. We’re not even picky about where this villain comes from: another evil Whitmore College professor, a non-supernatural Mystic Falls resident determined to keep magic out of her town at all costs, etc.”