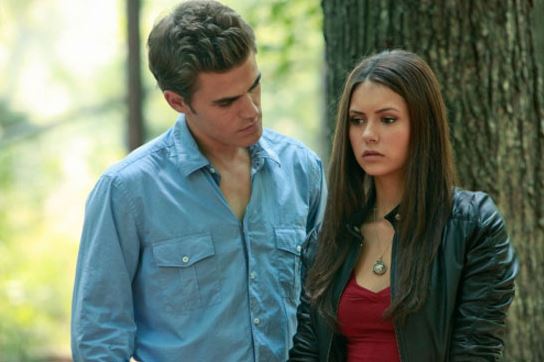 Vampire Diaries Season 6 Spoilers: How Elena and Stefan React to Death of Damon and Bonnie

Vampire Diaries season 6 has a lot to deal with plot-wise, including reactions to the death of Damon and Bonnie.

But in what is sure to be a surprise to some, Elena seems to have moved on in the season 6 premiere–at least on the outside.

“One of the big questions you’ll be asking when we get back is how did she pick up the pieces?” executive producer Julie Plec told TVGuide.

“Or did she pick up the pieces at all? When we come back, several months have passed and Elena has returned to her life at school and seems to be doing well, but the mystery is really how well is she doing? And she’s got some odd and awkward coping mechanisms that inform a lot about where she is and how she’s handling this particular grief.”

Plec elaborated more when asked if Elena can really move on.

“What happened to her is that in spite of losing her parents and her brother, her aunt, her friends again and again, she lost the person she singularly believed to be the man she was going to spend all of eternity with. I think there’s a special form of grief that comes attached to that, which will be difficult to get past, but also the choices she makes at how to move on will be very interesting to watch.”

And how will Elena and Stefan mourn, together or apart?

“Well, speaking of coping mechanisms, each of them have a very specific method of how they’re dealing with it and they find a strange appreciation of each other’s methods even though they’re not necessarily healthy,” Plec said.

“They connect over the fact that sometimes it takes extreme choices to move past something that has hurt you so deeply. So we will see their friendship able to be strong and healthy in spite of the way each of them individually are dealing with their loss.”

Plec previously said that Stefan could go dark while dealing with the profound loss.

“I think it’ll be surprising. I don’t want to say too much about it, but he lost something very profound, and there are a million ways he could go,” she said.

” He could go light, he could go dark, he could go pure, he could lose his mind and get on a motorcycle and drive to Miami. So what he ultimately ends up doing will be an interesting reflection on his state of mind at the moment — and very fun for Paul [Wesley] to play.”