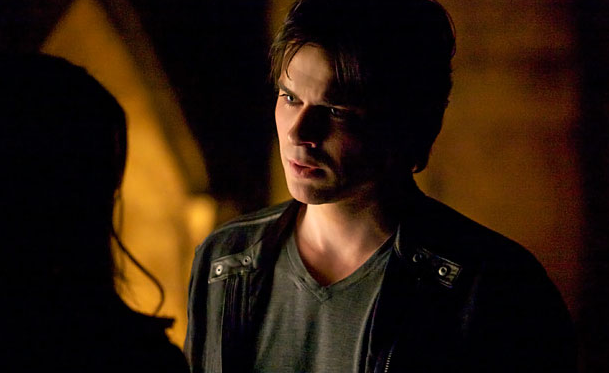 Vampire Diaries season 6 is coming up and fans are still analyzing the season 5 finale with all its twists and turns.

The finale ended [spoilers] with Damon holding hands with Bonnie as they accepted their fate, seeming to slowly vanish into the white light.

The finale won several awards from Entertainment Weekly readers, including Best Use of Music (for Damon’s goodbye to Elena) and Best Death or Exit, and Best Final Shot.

Chris Grismer, who directed the episode, revealed how that final shot was made.

In the end, it was pretty low-tech.

We just sort of over-exposed it, just old-school, and used smoke, and then I just had them grab the cameras and shake them,” he said, with a laugh.

“The weird thing about it was the actors couldn’t hear each other because we had fans going and it was just pure chaos. So they kinda had to guess when it was their turn to talk, and then we dubbed their voices afterward.”

Damon’s emotional farewell with Elena (Nina Dobrev) also had challenges. Ian Somerhalder could look at Dobrev for his close-ups but since Elena couldn’t see Damon because he was dead, Dobrev had to spend time acting without Somerhalder int he frame.

“To have her hair move [as though Damon was touching it], I had to have a green rod come in in the middle of the scene and move her hair, and she had to just keep in the moment, even though we were throwing all these curveballs at her,” Grismer said. “She did a great job.”