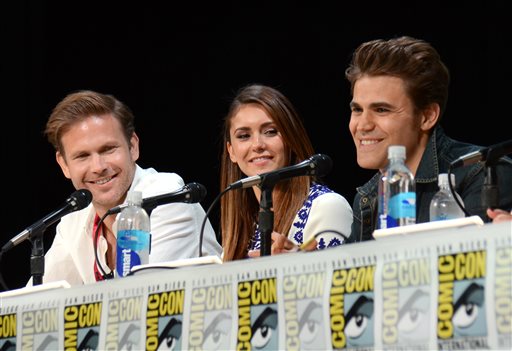 Matt Davis, who plays Alaric on The Vampire Diaries, said he was considering walking away from the show after he got tired of making sporadic guest appearances.

According to Digital Spy, he said showrunner Julie Plec offered him a regular spot eventually.

“It was very uncomfortable for me to come back as a guest star,” he said”I felt very much removed and out of sync with the whole experience.

He added: “I felt awkward and I thought, ‘I don’t think I can keep saying yes to coming back in these little guest star appearances here and there, ‘cos it’s just too hard for me emotionally’.”

Davis said he was prepared to talk with Plec about leaving.

“I was prepared to have that conversation with Julie,” he added. “But before I could say anything, she was like, ‘So… we’re thinking about bringing you back – how do you feel about that?’

He added: “I was thrilled to be able to come back. I had felt very much in limbo with Alaric for the last two seasons. Now I feel like it’s even better than it was before.”

‘The Vampire Diaries’ takes bite out of Comic-Con

SAN DIEGO (AP) — Season 5 of The CW’s “The Vampire Diaries” ended with characters Damon and Bonnie (played by Ian Somerhalder and Kat Graham) being separated from their loved ones as they enter a mysterious, purgatory-like dimension.

The cast returned to Comic-Con on Saturday where they played a video of Somerhalder and Graham wondering about their fate off-screen, now that their characters are trapped in oblivion. Are they off the show? Will they get a spin-off?

“The Vampire Diaries” is a about vampires, werewolves, doppelgangers, witches and a few humans living in and around the fictional town of Mystic Falls, Virginia. It’s loosely based on a book-series.

—Season 6 picks up about four months after the events of the finale.

—Davis’ character Alaric, back from the dead and a full-time cast member again, is now a college professor.

—Plec doesn’t see Dobrev’s Elena turning to her former flame Stefan Salvatore for anything other than friendship, now that she’s separated from Damon. “Right now the love between Damon and Elena is so strong,” she said.