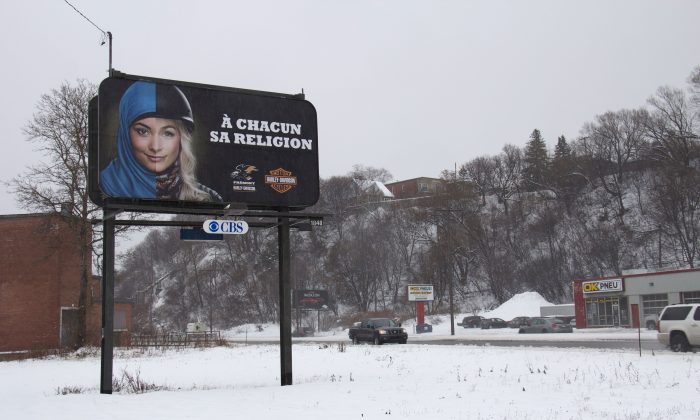 A billboard in Quebec reading “To each his own religion,” shows the face of a woman wearing a hijab on one side and a motorcycle helmet and jacket on the other. The ad is part of a campaign by a Harley-Davidson motorcycle dealer opposing Québec’s proposed values charter. A sovereignty group says the charter is a bad idea and will be detrimental to Muslim women. (Anne Levasseur/AFP/Getty Images)
Canada

A Quebec sovereignist group has joined the backlash against the province’s proposed values charter, saying it endorses intolerance and would be detrimental to Muslim women.

The group, Sovereignists for an Inclusive Secularism, says the charter marginalizes Muslim women in particular and infringes on their human rights by forcing them to abandon their hijabs, a profound symbol of modesty, privacy, and morality in the Muslim faith.

The group’s vice president, Rosa Pires, says the Parti Quebecois government did not consider or study the potential consequences when it proposed the charter, which she says has stigmatized many Québec women and their families.

“The damage will take time to repair,” Pires said in a press release. “Whole communities that are so close to the [French-language] majority for linguistic and historic reasons feel rejected by Quebec.”

Also known as Bill 60, the charter would prohibit public employees from wearing “conspicuous” religious garb such as hijabs, turbans, yarmulkes, and large crucifixes. Quebec Premier Pauline Marois has said the move is necessary to ensure the public service presents a neutral face and protects equality between men and women.

The proposal has sparked a firestorm of controversy and debate since it was initially proposed in the fall of 2013. While opinion polls indicate there is some support for it, opponents have called it discriminatory and divisive.

Sovereignists for an Inclusive Secularism say the ban on religious gear should be limited only to police officers and judges, who must be careful not to present bias of any kind, instead of imposing it on all public servants.

“We do not believe that in the majority of functions, the wearing of religious symbols by certain employees undermines the religious neutrality of the state,” said Bloc Québécois MP Jean Dorion, a member of the group.

“On the contrary, insofar as these people avoid proselytizing and any form of favouritism, we believe it is banning these signs that may suggest that the state is not neutral but hostile toward religions that prescribe them.”

Marois has said that wearing a hijab represents a form of submission, and could subtly influence children to adopt these beliefs if teachers, daycare workers, and doctors are seen wearing them.

She has also insisted the charter would be a uniting force for Quebec and reflect the province’s values as well as “universal” values.

Dorion says there is no evidence public employees who wear religious symbols have any influence on those they serve.

“Can you present a single serious study showing that in Quebec, state employees who wear religious symbols have ever, in their functions, proselytized or shown favouritism based on their beliefs?” he asks.

A ban on religious attire would reflect a deep mistrust of minorities and set a negative precedent, Dorion added.

“The role of the state is certainly not to endorse intolerance against certain communities, but rather to contribute by its own attitude to dispelling it.”

A Jan. 20 Léger poll found that 60 percent of Quebecers back Bill 60. Among French-speaking voters, support has reached 69 percent.