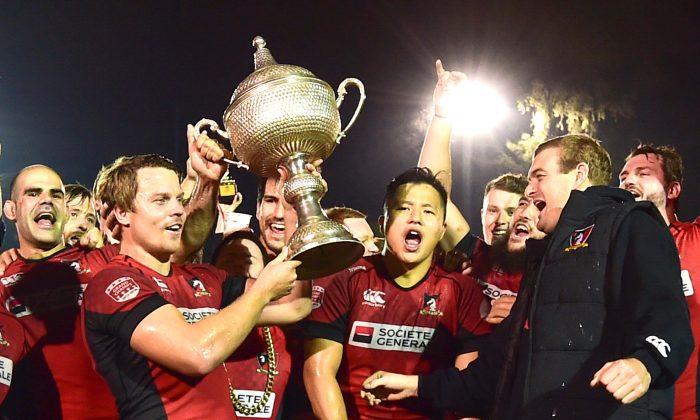 Valley Black Ladies beat their long-time rivals Gai Wu Falcons, 15-7. The final pitted two teams with contrasting styles of play. Would the physicality of Valley be undone by the speed and pace of Gai Wu? No. Valley were simply better; they defended well, and had to defend for much of the game, but took their chances each time they were in the opposition 22. Gai Wu had plenty of pace, put in a gutsy performance, but could not convert territory, possession, nor the poor discipline of Valley, who coughed-up an incredible number of penalties.

A last minute penalty try flattered the scoreline and disguised the fact that Valley were never threatened throughout the match. Valley took the lead in the first-half with a barreling try by flanker Olivia Coady, converted by Zoe Smith, who later added a penalty goal. After 20 minutes Valley led 10-0.

For the next 50 minutes of play, which included a Valley sin-binning, Gai Wu had match momentum, but found no way through the Valley brickwall defence. It wasn’t until the 70th minute, when Valley made a rare foray into the Gai Wu, 22, recycled the ball quickly and Milo battered her way across the line, to extend Valleys lead to 15-0.

Again, Gai Wu hammered at the Valley line in the final minutes. They won a deserved penalty try at the whistle, but it was way too little far too late.

This was the third year in succession Valley Ladies have won the League and Championship. For three seasons (42 matches) they remain undefeated: a remarkable achievement, and credit to the passion and spirit of the club. Gai Wu provide tough opposition, and will one day convert their narrow losses into a deserved victory, but not yet, not this season. Bragging rights in Women’s rugby remain the preserve of the ladies in red and black.

The Men’s final was between, Societe Generale Valley and Kowloon, the two form sides from the latter part of the season. It was not a showcase match. Valley won 22-13, yet Kowloon outscored them two tries to one. Kowloon, with more match confidence would have pushed Valley closer. Attacking flair was with Kowloon, but game management, pack discipline, plus bench strength was with Valley.

Neither side wished to lose: and the early exchanges were cagey. The difference was the consistency of the boot of Valley flyhalf Ben Rimene. After 20 minas Valley were  6-0 ahead, yet the momentum of play was with Kowloon. Jack Neville, the Kowloon flyhalf did not enjoy the same consistency as Rimene, and missed two kickable penalty goals. It wasn’t until the stroke of half time, and Valley down to 14 men, with Karetai Williams sin-binned, that Kowloon closed the gap to 6-3, with Neville eventually finding his kicking radar.

Kowloon dominated the second-half opening, but paid for their profligacy in the Valley 22, when Valley counter-attacked, and won a penalty goal, converted by Rimene. Instead of being ahead, Kowloon found themselves 9-3 behind. At 50 minutes, the Kowloon enterprise came good with a well-worked try by the three-quarters, and winger Thomas Bury touching down in the corner. Neville could not convert, and the match was now a one point game, with Valley leading 9-8.

This was as close as it would get: Valley upped the match tempo. Their pack began to change an edge into dominance, especially in set-piece play, and Rimene added two more penalty goals, to move Valley out to 15-8. On 67 minutes, after more Valley pressure, substitute scrumhalf Reece Hamon dived over for a try. Rimene added the extras. Valley looked ‘home and dry’ at 22-8.

Despite losing captain, Phil Whitfield to a yellow card, Kowloon kept taking the game to Valley. Prop Angus Dixon, thumped his away across the line, giving Kowloon consolation and hope, on the scoreboard, with the score narrowed to 22-13. Neville missed the conversion.

Valley closed out the match. Victory made it five Championship wins in a row. Yet Kowloon provided the more entertaining passages of play. Instead playing not to lose, had started from the outset, to play to win; and if Neville, who had a good game with the ball in hand, had had a better game with his boot (10 points went begging), then possibly those 40th celebrations may have included a Championship.

Credit and kudos to Valley. Their match management, fitness and use of all 23 players, plus the unerring accuracy of Rimene, make them the benchmark team in Hong Kong. They have done much to ensure the standard of club rugby in the SAR continues to improve. Roll on 2017/18.