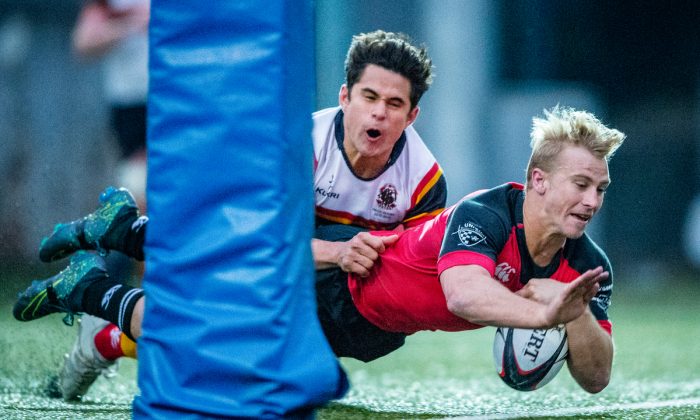 HONG KONG—On Saturday afternoon, in cold and chilly conditions at Sandy Bay Sports Ground, on the south side of Hong Kong Island, Societe Generale Valley sealed the Hong Kong Premiership league title, their first since the 2009/2010 season, by outplaying and outscoring close rivals, Leighton Asia Hong Kong Cricket Club, 45-10. Valley scored seven tries to one. It was an emphatic display, their best of the season. Valley turned on the style, secured the title, remain undefeated, and now attempt the ‘double’ and take the Grand Championship title at the end of season.

After less than a minute, even before HKCC had caught their breath from the warm-up, Ryan Mecheam, the Valley winger scored. An incisive run by centre Laim Bax, split the HKCC defence, and created space for Mecheam to score. Flyhalf Nicholas Holton converted, and Valley led 7-0. On 20minutes HKCC fullback Alex MacQueen converted a penalty for HKCC, to narrow the deficit to 7-3. This was as close as HKCC would get all afternoon to Valley on the scoreboard. On 28 minutes Dayne Jans, the Valley hooker crossed to score Valleys second try. The conversion was missed, but Valley led 12-3. The score remained that way at half time.

Valley began the second-half strongly, with an unconverted try after only 2 minutes by fullback Ed Rolston; 17-3 to Valley. Then after 20 minutes, prop Tony Wong intercepted a loose pass and showed impressive pace to sprint 60 metres to score, converted by Holton, and taking Valley out to a deserved 24-3 lead, with the ‘try bonus point’. The scoreboard kept turning over for Valley: winger Salom Yui Kam scored after 65 minutes, converted by Holton; then Ryan Meacham on 70 minutes scored his second, again converted by Holton, and Valley led 38-3.

HKCC salvaged pride with a try by prop James Cooper, converted by MacQueen, but Max Woodward ensured Valley had the last word, with a fine individual try, again converted by Holton, securing a comfortable and impressive 45-10 victory.

The final whistle sealed Valleys status as League Champions for 2015/2016. It was a frustrating afternoon for HKCC, who were off-the-pace, tackled poorly and unable to respond to the Valley attack. Valley, on the other hand, provided their best performance this season; it deservedly gave them the title and raised their ambition for further honours. They basically hit the Cricketers for six, albeit with seven impressive tries.

In other matches Borelli Walsh Tigers regained winning form beating Sabre Kowloon, 25-20 at Kings Park; and Natixis Hong Kong Football Club, won a crucial away match against Bloomberg Hong Kong Scottish at Shek Kip Mei, 25-15. No St. Andrews day celebrations for Scottish this season!
Valley, having sealed the League, with three rounds to play, has 53 points. In joint second on 27 points is HKFC and HKCC, (HKCC has a game in hand). In fourth place Tigers on 25points; Scottish in fifth, on 20 points; and Kowloon, sixth on 13 points, (with a game in hand). Valley has secured pole position, but the remaining teams are all in contention for the other slots.