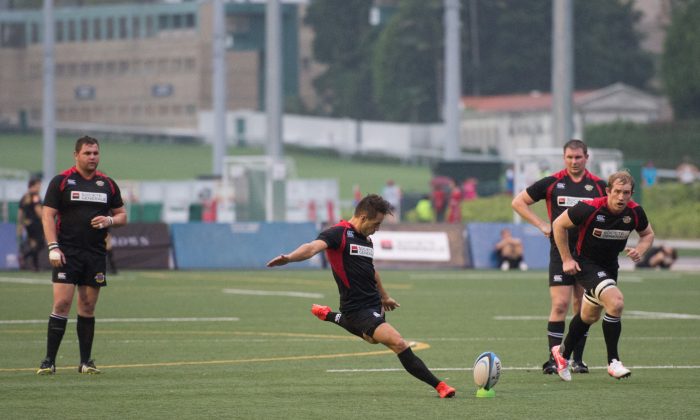 HONG KONG—Societe Generale Valley comfortably beat Borelli Walsh USRC Tigers in the 2nd round match of the Hong Kong RFU Premiership, 23-13 on Saturday 10th October. It was a keenly contested match, but Valley was never really threatened. Tigers proved their earlier victory over Natixis Club, on the opening day of the season was no fluke. They provided spirited opposition, but lacked accuracy in kicking and finishing that would have kept the scoreboard moving and put Valley under pressure.

It was a game marred by penalties, so lacked continuity, but provided occasional sparks to show both teams have flair.

The opening 20 minutes of the first half was dominated by Valley. They led 6-0, with two penalties from flyhalf, Reece Hamon. Tigers eventually got on the scoreboard, after 25minutes, with a penalty from scrum half Matthew Price, making it 6-3. Neither side had threatened the tryline, although both had made tentative ventures into the opposing 22.

At 28minutes, Valley winger, David Vainqueur, injected energy into the game, with a powerful 30m run beating three Tigers defenders to score in the corner. The try was converted, and Valley led 13-3. The game came to life. For the last minutes of the half, both Valley and Tigers butchered chances to score, with Valley the more wasteful. At half time it was still 13-3, and Valley should have been sitting on a comfortable lead with the game under control.

In the second half, Tigers began strongly and looked as Valley may pay for their profligacy. After 44minutes, Matthew Price scored another penalty making it 13-6. And Tigers moved in touching distance of Valley. However, almost immediately, Tigers fullback, Casey Stone was sin-binned, swinging the game back in Valley’s favour. Reece Hamon, kicked the penalty, 16-6, and Valley began to dominate.

On 57minutes, a good box kick from Ed Rolston, the Valley scrumhalf, put Tigers under pressure, and the strong follow-up by Valley led to a score under the posts through lock, Andrew Smith, converted by Reece Hamon. 23-6 to Valley.
Tigers did not back down. They rallied, and in the final fifteen minutes, in the failing light, Tigers flanker Samuel Hocking scored from a driving maul, after well-worked lineout. The try was converted by Matthew Price and the score moved back to only a 10 point difference at 23-13. Tigers had penalties that could have narrowed the score, but opted for touch and territory. The Valley defence was resolute; one try was all they were prepared to concede. And Tigers also made a hash of a clear overlap close to the Valley tryline. Chances went begging.

Valley had a final flourish, but like Tigers, could not make the final pass count. The score remained 23-13 to Valley. Valley deserved victory. They remain unbeaten, even though for this match they were not at their best. Tigers were competitive and perhaps should have done better, but have clearly put down a marker that they are strong team, and will provide resolute opposition this season.

In other matches, Bloomberg Scottish beat Leighton Asia HKCC 34-15 at Aberdeen; and Natixis Hong Kong Football Club beat Sabre Kowloon, 27-10. After two rounds only Societe Generale Valley remain unbeaten in the HKRFU Premiership; Sabre Kowloon is winless; all other teams are ‘won one lost one’. It looks to be a competitive season and strength in depth will be key to winning the Premiership. There will be no easy matches this season.

Grahame Carder is a sports enthusiast and former player from representative Schoolboy level, through University and most corners where he has lived, Currently works as Consultant on Strategy and Marketing.