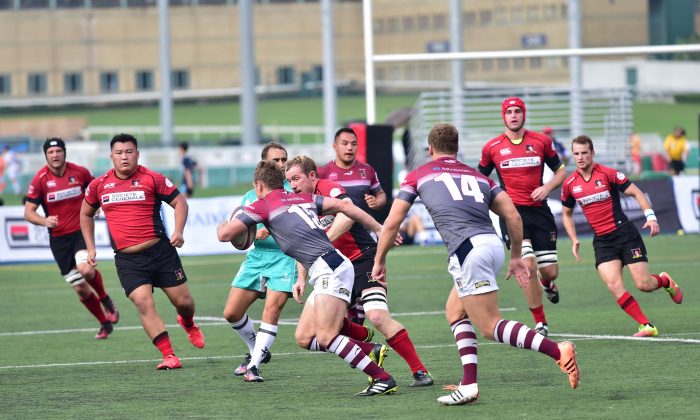 HONG KONG—Societe Generale Valley narrowly beat Kowloon on Saturday 24-18, in a lacklustre match, where both teams appeared impatient for the final whistle, and at times, the team waterboys (hydration technicians!) generated more action than the players. Kowloon deservedly secured a losing bonus point, but having led Valley until final 10 minutes of play, it was another match where with more depth to their bench and match-winning confidence they could have caused an upset.

Valley began the match with attacking intent, and after 8 minutes took the lead 3-0 courtesy of flyhalf Ben Rimene converting a long-distance penalty. Despite Valley pressure, Kowloon held firm; then shocked Valley, when Kowloon flyhalf, Jack Neville scored an 80 metre intercept try, showing a clean pair of heels to a rather flat-footed Valley defense, to turn the game on its head. Despite scoring under the posts the effort to get there mitigated against a successful conversion, but Kowloon led, 3-5 after 10 minutes. Neville subsequently extended the lead to 3-8 with a successful penalty 5 minutes later.

Valley regrouped and centre Ally Maclay, broke through the Kowloon tacklers to force his way across the line, after quick passing by Valley stretched the defense. The try was converted by Rimene and Valley led 10-8.

In the final play of the half, after a well-placed tactical kick into touch from a penalty, Kowloon created a scoring opportunity, and duly delivered, by driving across the line from the lineout. Neville converted, and halftime Kowloon led 10-15.

In the second half, Valley came back at Kowloon. Finally after 60 minutes, Thomas Lamboley, number eight, touched down for a pushover try, converted by Rimene, to edge Valley back into the lead 17-15.

The Valley lead did not last long, before Neville slotted a neat penalty to give Kowloon a narrow one point advantage 17-18, with 15 minutes to go.

The unthinkable did not happen. Perhaps the thought of two consecutive defeats was the motivation Valley needed to find an extra gear. At 72 minutes Maclay chased a loose ball through the Kowloon defense to score his second try, converted by Rimene. It put Valley infront 24-8, and they closed out the match.

Valley won, but it was unconvincing performance. Despite their attacking intent, Valley seemed blunt in cutting through tackles and made too many handling errors to build momentum. Disrupted by injuries, it is a chance for their talented younger players to perform at a higher level, but it appears ‘work in progress’, and will be exposed by opposition if key player combinations don’t settle. Kowloon were well-worth their bonus point, but will feel frustrated not  hanging-on to win, and missing a rare chance to consign Valley to defeat.

In other matches, the heavyweight clash between Herbert Smith Freehills HKCC and Natixis HKFC, ended with a 23-23 draw. At one stage HKCC led by eleven points, but a solid performance in the second half by HKFC ensured the game ended honours even. Elsewhere, Bloomberg Hong Kong Scottish tamed Borrelli Walsh USRC Tigers, 41-29 with both teams earning a four try bonus point the process, in an entertaining match.

After round 5, and a third of the way through the season, Valley leads the Premiership with 18 points; Scottish second with 15 points; HKCC on 13 points; HKFC on 11 points; Tigers on 9 points and finally Kowloon with 5 points.