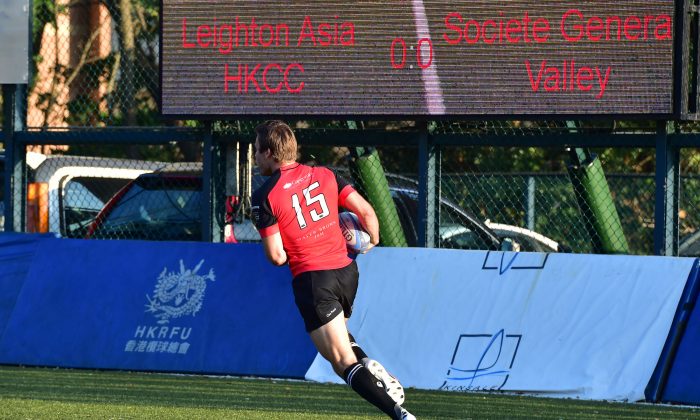 Valley Remain Unbeaten, Kowloon Score Their First Win of the Season and Club Go Second in the League

Valley vs HKCC
Valley romped to a 15-3 lead by half time, playing quick, precise rugby. They scored two tries, the first by fullback Ryan Meacham, and second just before half time by winger Dominic Jacobson. Valley flyhalf Ben Rimene converted one, and added a penalty. HKCC clawed back one penalty through fullback Jason Kjestrup.

Three yellow cards in the second half, against Valley, saw them surrender the match initiative, and allow HKCC back into the game. A converted try by HKCC second row, Bill Bryant; plus a penalty, by Kjestrup, narrowed the scoreline to 15-13, before Valley reserve Nicholas Holton, eased the pressure converting a penalty for Valley. With ten minutes remaining Valley led 18-13, but conceded yet another penalty, again converted by Kjestrup, to make it 18-16. HKCC sensed victory, pressured the Valley line, only for Valley to have the final say, with a 75minute penalty by Holton, to stretch the lead to 21-16.

A close match and game of two halves: Valley majestic in the first half, but forced to defend resolutely against a spirited HKCC comeback. For most of the second half HKCC had the numerical advantage, with three Valley players sin-binned. At this level, HKCC should have edged victory, although there was some solace in gaining a losing bonus point. Credit to Valley. They defended well, and remain undefeated after seven matches.

Kowloon vs Tigers
In the second match, Sabre Kowloon, upset second place Borelli Walsh USRC Tigers, 33-19 for their first win of the season.

This began a series of penalties by Fleming and Gallagher over the next phase of play, either side of half time. Tigers led 10-13 at halftime. After 55minutes the game was evenly matched at 19-19, when Tigers centre, and later hooker, were sin-binned. This gave Kowloon numerical advantage, which they gladly exploited. A try by scrumhalf Bryn Phillips, converted by Fleming, pushed Kowloon out to a 26-19 lead. This was extended, with another try through winger Shaun MacManus, again converted by Fleming, to give Kowloon a sweet, hard-fought victory 33-19, and hopefully a turning-point for their season. Tigers will rue the sin-binning, it shifted the balance of the game. Fleming and Gallagher were pivotal for their teams, scoring 18 points and all 19points respectively.

HKFC vs Scottish
Across the harbour, HKFC hosted Scottish, and won the match 25-20. At half time, the teams were evenly poised, with HKFC leading 15-13. In the second half, HKFC proved sharper in attack, tighter in defense, and more dangerous on the counter attack. Scottish could never get any momentum with the ball, either spilling possession or conceding penalties. HKFC scored early in the second half, to ease to 22-13 lead, and later added a penalty, for 25-13. A Scottish comeback suddenly seemed possible when they scored a converted try on 78minutes, to narrow the score to 25-20, after Scottish was able to retain possession long enough to score. However, Scottish spilled the ball from the restart, and HKFC only had to run down the clock, for a deserved victory.

Valley remain comfortably top of the league after round seven with 30points: with both Scottish and Tigers losing, their margin of comfort widened. HKFC are now second on 17points; Tigers and Scottish are joint third with 16; HKCC on 14, and Kowloon on 9points.