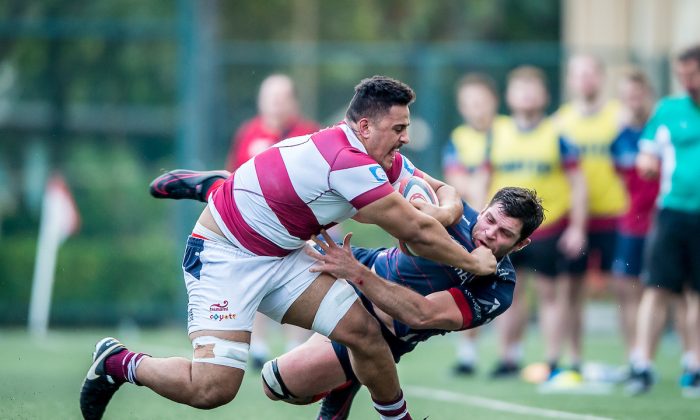 Valley Edge HKCC to Return to the Top

HONG KONG—Societe Generale Valley returned to the top of the Hong Kong Premiership on Saturday Dec 10 with a narrow, tense victory over Herbert Smith Freehills HKCC, 31-29 at Aberdeen. It took a last minute try from fullback Tiger Bax and a successful conversion from flyhalf Ben Rimene, to win the match.

This is the Season of Goodwill, though at times on the pitch, there was a marked edge and tension to the match, with hard physical tackling and the occasional continued exchange long after the ball had been cleared. In the second half, the HKCC medic was one the busiest HKCC team members, nursing HKCC through to the final whistle.

The game turned on two moments for Valley, both coming at the end of each half, with decisive tries. In the first half, a last minute try kept Valley in the game; in the second half, another last minute try won the game. The former was against the run of the play, the latter secured victory.

In the first half Valley opened the scoring with a penalty goal from Rimene, after winger Ed Rolston came close to scoring with a probing run out wide. The resulting pressure gave Valley first blood with the penalty. HKCC replied with two penalties from fullback James Love and after 10 minutes, HKCC led 6-3. HKCC was the dominant side: their tackling was precise, they crossed the gainline and the pack won good ball. Pressure told, they kicked ahead, and scrumhalf Liam Slatem charged down Tiger Bax’s clearance and winger Robbie Macdonald touched-down the loose ball for HKCC. James Love added the extra points and HKCC led 13-3.

Ten minutes later a break down the left by flyhalf Jason Kjestrup was clinically finished-off by Liam Slatem, and the try converted by James Love. HKCC deserved their 20-3 lead.

In the final minutes of the half, after sustained HKCC pressure Valley flanker Nick Hewson was yellow-carded and HKCC looked set to extend their lead. Instead a fumbled pass in the HKCC backline, and Valley snapped-up the loose ball, ran the length of the field, passing through seven pairs of hands, before centre Ally Maclay finished the move. Rimene uncharacteristically missed the conversion, and the score was 20-8 to HKCC at halftime. Valley instead of being down-and-out, went into the break with hope; and HKCC perhaps with trepidation they did not finish the half further ahead.

Hope turned into Valley pressure from the outset of the 2nd half. The Valley pack, despite a man down found an extra gear. A penalty goal after 48 minutes for Valley narrowed the score to 20-11, only for James Love to restore the 12 point gap with another penalty for HKCC, 23-11.

After 55 minutes, Valley flanker Toby Fenn barreled over for a try, converted by Rimene narrowing the score to 23-18.

The game saw penalties traded by Love and Rimene until the 79th minute. With the score 29-24, and HKCC reduced to 14 men after Robbie MacDonald was yellow-carded, Valley were camped on the HKCC line for nearly 10 minutes, before Tiger Bax, broke though the HKCC defense, and crossed to score, making it 29-29, before Rimene, did what he does best, and secured victory for Valley with the successful conversion.

Halfway through the season, Valley head the Premiership with 31 points, followed by Scottish on 29 points, Kowloon on 21 points, HKFC 17 points, HKCC 15 points, and finally Tigers with 10 points.