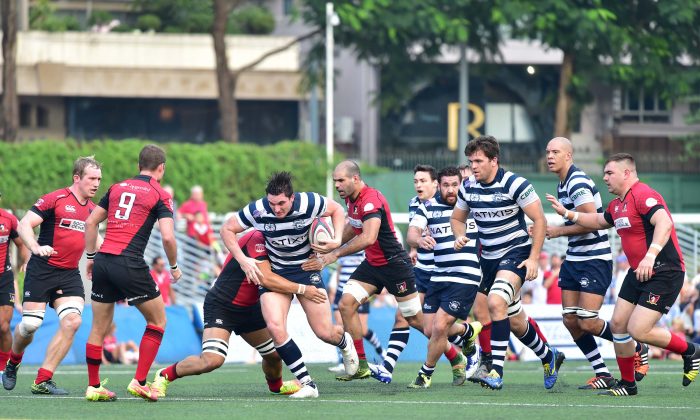 HONG KONG—Societe Generale Valley beat Natixis Hong Kong Football Club, in a tight but exciting game at Happy Valley on Saturday. The win kept Valley on top of the Premiership, and HKFC will look back and wonder how they did not secure victory. It was another match scare for Valley, where they managed victory against the odds. Hallowe’en is lasting a long time for the men in red and black!

Valley opened the scoring, through two penalties by flyhalf Ben Rimene to lead 6-0, but then appeared to relax, allowing HKFC to gain match momentum, and claw back into the game. HKFC was rewarded with a well-deserved try, by centre Ben Axten-Burrett, converted by Max Page. By halftime HKFC led 6-7, and looked the sharper of the two teams.

The second half was a rollercoaster. Rimene opened the scoring with another penalty, to put Valley ahead again, 9-7; then Grant Kemp touched-down through a forward drive by the Valley pack, converted by Rimene, to extend the Valley lead to 16-7.

HKFC responded with a try by John McCoppin, converted by Page, to narrow the score to 16-14. Valley, inspired by their pack and led from the front with a try by prop Leon Wai, with Rimene converting, and Valley edged ahead 23-14. Again, HKFC came back, this time with a try by Jamie Lauder, converted by Page, and it was a 2-point game, with Valley leading 23-21. In the final twist, Valley fullback Doug Fluker scored to give the home side a narrow victory 28-21. Another close nail-biting match.

HKFC secured a bonus point with the loss, but will rue missed opportunities and that pressure did not result in points. It was a match where the more enterprising team lost. Credit to Valley. They gave a gritty defensive display and defended their line in the final minutes to secure victory. HKFC is probably still wondering how they didn’t score.

There is now two week hiatus in the Premiership for the ‘international window’, with Hong Kong hosting the Cup of Nations. This is a welcome break for the teams. The matches this season have been tight, close, hard-fought contests. Valley, so dominant last season, look vulnerable this year. At this stage they remain favourites to retain the Championship, but all other teams are capable of winning on their day, making this season very open.

Valley lead the Premiership with 22 points; followed by Scottish with 19 points; HKCC with 14 points; HKFC with 12 points, and Kowloon and Tigers both with 9 points, although Kowloon is narrowly ahead on points difference.