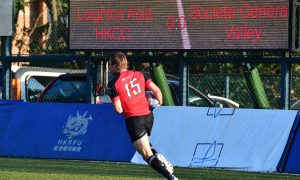 Valley Remain Unbeaten, Kowloon Score Their First Win of the Season and Club Go Second in the League
0 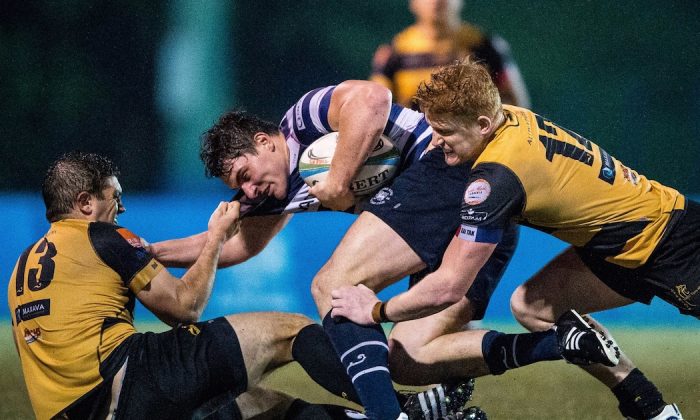 HONG KONG—Societe Generale Valley conquered The Rock on Saturday, by beating Bloomberg Hong Kong Scottish at their home ground in Shek Kip Mei, commonly known as The Rock. The score, a convincing 30-15 victory, which preserved Valleys unbeaten start to the season, and consolidated an almost unassailable lead in the Hong Kong Men’s Premiership.

Scottish played bravely, and took the game to Valley from the outset. After 10minutes, they had built up an 8-0 lead, with a try by flanker Alessandro Nardoni, and penalty converted by scrumhalf Charles Cheung.

Valley responded 5minutes later. They were quickly adjusting to wide pitch and enjoying the space for the backs to run. They moved the ball crisply along the backline, with good interplay between centres and wingers, for a well-worked try in the far right corner by winger, Ryan Meacham. This was followed by a penalty, converted by flyhalf Nicholas Holton, and the score was 8-8 after 20minutes.

A ten minute in-bin for an over-enthusiastic tackle by Scottish centre Lex Kaleca, forced Scottish on the backfoot, and gave Valley match momentum. Although Valley did not score during this time, Scottish had to work hard to stop the constant attacks, and even had a chance to score, but missed the penalty conversion.

The Valley pressure was taking its toll on Scottish. In the final 5minutes of the half, Valley ran in two deserved tries. The first, created by centre Ally Maclay, but scored by substitute winger Max Woodward, who span out of two tackles to cross the line. The second was by winger Ryan Meacham. A poor clearance by Scottish was returned with interest. It was gathered by Valley fullback Ed Rolston, who put Meacham in space, to run 40m to score. Both tries were converted by Holton, and he also added a penalty on the stroke of halftime.

At the break Valley led comfortably 25-8, and the game looked ‘done and dusted’.

The second half lacked the enterprise of the first. Maybe the cool, wet weather was having an effect, or both sides were carrying too many injuries to warrant a full-blooded match. Valley dominated possession and territory in the second half, but could not cross the Scottish tryline. Full credit to Scottish, who played gamely with a depleted pack and frustrated Valleys efforts.
Scottish entered the Valley 22 for the first time late in the half. The Scottish pack demonstrated their skillful tenacity with another forward rumble over the tryline for Nardoni to score his second try, duly converted by Mark Coebergh, closing the scoreline to 25-15.

The final say belonged to Valley. Substitute flanker, Andrew Bridle ran at the Scottish backline, pinned his ears back, broke through and crossed for the bonus point try. It was a fine individual effort. The conversion was missed, and the final score was 30-15 to Valley.

This was an assured but patchy performance by Valley. When the team can call on a bench lined with Hong Kong international talent, such as Woodward, Roslee and Rimene, this shows real strength in depth, and perhaps a slight frustration that they could not go on and score more freely in the second half. Scottish defended well, but two sin-binnings take their toll on the players remaining on the pitch. The Scottish bench was so depleted; the coach had to come on. The difference between the two sides was depth.

Both teams had ‘walking wounded’ and will be looking forward to the Christmas break. Valley clearly have more to celebrate…and their Christmas party began in earnest on Saturday, with both the Men’s and Women’ team winning, and both remain undefeated this season. Scottish remains in the hunt for playoff spot, so their season might be tough, but not without hope.

In the other matches, Borelli Walsh USRC Tigers rediscovered their bite, and beat Natixis Hong Kong Football Club, 24-18 at Kings Park, scoring three tries to one. The match between Leighton Asia Hong Kong Crick Club and Sabre Kowloon was postponed due to rain.

After round 8, Valley sit comfortably at the top of the table with 35points, Tigers are next with 20, Scottish on 16, Club 15, and HKCC and Kowloon 12 and 6 respectively with a game in hand. It’s too early to think of the play-offs, but Valley look solid for one of the four places, but it’s still very open for the remaining three.