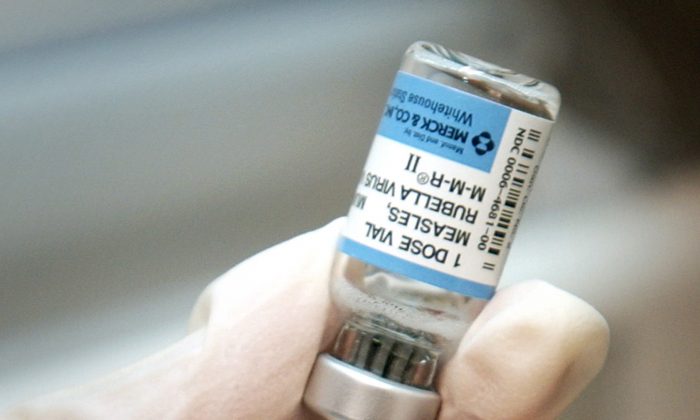 Vaccines Don’t Cause Autism. Trust Us

Autism, once so rare that it afflicted just one person in 10,000, now afflicts one child in 30, according to a new study in JAMA Pediatrics. In boys, who are especially susceptible to autism, the rate is one in 22, or almost 5 percent.

No one can be sure of the causes, we’re often told, although the health care establishment speculates they could include everything from complications at birth to being born to older parents to climate change to genetics. The only cause that can absolutely, positively be ruled out as responsible for the meteoric rise in autism, state CDC and other health authorities, is vaccines, adding that only quacks and ignoramuses believe that there could be any relationship between the increasing number of jabs that children have been receiving over the decades and the increasing number of children afflicted with autism.

To make sure that the public didn’t get the wrong idea, and put stock in the mounting anecdotal evidence of children developing autism after receiving a vaccine, the Institute of Medicine (IOM) decided in 2004 to refuse to conduct research into a direct connection between vaccines and autism.

In part, the IOM viewed the topic as too hot to handle: “Autism is among the most contentious of issues reviewed by vaccine safety committees of the IOM,” it explained. “One needs to read just one of the many websites and internet-based discussion groups on the issue of autism to get a picture of the complicated lives of families with children with autism and the anger of some families toward the federal government (particularly the CDC and FDA), vaccine manufacturers, the field of epidemiology, and traditional biomedical research.”

In addition, the IOM thought the research would be too complex, and fail to arrive at a meaningful conclusion since autism is likely to be caused “by a constellation of symptoms that have multiple etiologies … . Thus, if there is a subset of individuals with autism syndrome triggered by exposure to vaccines, our ability to find it is very limited in the absence of a biological marker.”

Most of all, the IOM reasoned that the very act of researching what it called the “presently speculative” theory that some people are genetically susceptible to being harmed by vaccinations would backfire, since it might lead the public to think a vaccine-autism connection was plausible, undermining vaccine acceptance.

“Using an unsubstantiated hypothesis to question the safety of vaccination and the ethical behavior of those governmental agencies and scientists who advocate for vaccination could lead to widespread rejection of vaccines and inevitable increases in incidences of serious infectious diseases like measles, whooping cough, and Hib bacterial meningitis.”

The IOM’s conclusion—that it “does not consider a significant investment in studies of the theoretical vaccine-autism connection to be useful at this time”—didn’t sit well with many, including Dr. Bernadine Healy, a member of the IOM as well as a former president of the National Institutes for Health, the world’s largest funder of vaccine research.

In a 2008 interview with CBS News, Healy explained that the government “basically said ‘do not pursue susceptibility groups, don’t look for those patients, those children who may be vulnerable.’ I really take issue with that conclusion. The reason why they didn’t want to look for those susceptibility groups was because they were afraid that if they found them, however big or small they were, that that would scare the public away.”

Healy, a believer in vaccines and as solid a member of the establishment as they come—her past credentials included professor and assistant dean of medicine at Johns Hopkins University, dean of the College of Medicine at Ohio State University, president of the American Red Cross, and chair of a White House Cabinet Working Group on Biotechnology—nevertheless felt her colleagues were “too quick to dismiss the [vaccine] hypothesis as irrational without sufficient studies of causation. I think that they’ve often been too quick to dismiss studies in the animal laboratory either in mice, either in primates … . The more you delve into it, if you look at the basic science, if you look at the research that’s been done in animals, if you also look at some of these individual cases, and if you look at the evidence that there is no link, what you come away with is that the question has not been answered.”

Other prominent scientists a decade and more ago also argued for studies to determine vaccines’ possible role in causing autism. Dr. Peter Fletcher, a former chief scientific officer at the UK’s Department of Health and former medical assessor to the Committee on Safety of Medicines—in this role he determined whether new vaccines were safe—in 2016 told the Daily Mail that “clinical and scientific data is steadily accumulating that the live measles virus in MMR can cause brain, gut and immune system damage in a subset of vulnerable children.”

Fletcher described the government’s “official complacency [as] utterly inexplicable,” saying “there has been a tenfold increase in autism and related forms of brain damage over the past 15 years, roughly coinciding with MMR’s introduction, and an extremely worrying increase in childhood inflammatory bowel diseases and immune disorders such as diabetes, and no one in authority will even admit it’s happening, let alone try to investigate the causes.”

Since 2004, following the lead of the IOM (since renamed the National Academy of Medicine), the public health establishment stepped up its efforts to root out any dissenters, denying funding to targeted research that might determine which subsets of the population were susceptible to autism and canceling those who persisted in challenging the orthodoxy. The mainstream press has followed in lockstep—in recent years no coverage of the few independent studies showing a vaccine-autism connection passed by its censors.

The IOM’s see-no-evil, speak-no-evil strategy has proven effective. Public health officials who have their doubts about the role of vaccines in autism remain tight-lipped. The mainstream press remains vigilant in barring the public from skeptical views. Nary a soul in authority dares to say boo as the number of children with autism continues its inexorable rise.