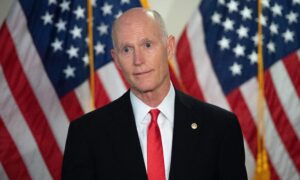 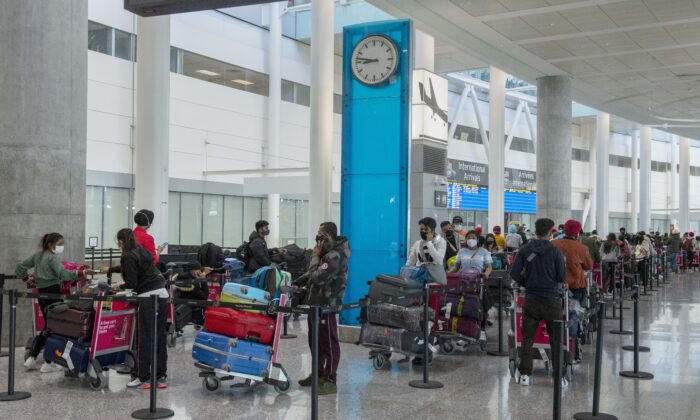 International travellers wait in long lines for transportation to their quarantine hotels at Pearson Airport in Toronto on April 23, 2021. (The Canadian Press/Frank Gunn)
Canada

A federal government tender notice suggests vaccine passports could arrive in Canada this summer, but questions about their implementation and ethics abound.

“The Canada Border Services Agency (CBSA) has an urgent need to secure the services of a global organization … with knowledge of and expertise in biometrics,” the tender reads.

“The Contractor will bring knowledge, capabilities, and experience to support CBSA’s urgent need to establish a biometric strategy, biometric foundation and ultimately a Biometrics Authority (Centre of Excellence).”

The tender closes June 24, according to an amendment made on June 14, and indicates Aug. 2 as the expected start date for the one-year contract, which has an “irrevocable option” that allows it to be extended for up to one additional year. The notice of proposed procurement reveals that 15 companies had been invited to submit a proposal, including PricewaterhouseCoopers LLP, Ernst & Young LLP, and Deloitte Inc.

Kerry Bowman, a professor of bioethics and global health at the University of Toronto, sees vaccine passports as inevitable and a necessary evil.

“I don’t love it, but I don’t see any alternative from a global point of view,” he said in an interview. “There’s layers of problems with this. There’s absolutely an element of surveillance to it, there’s no question.”

Bowman views freedom of movement as a “democratic right” that vaccine passports could facilitate for recipients but hinder for others, even while it provides false incentives for people’s health choices.

“Some people say, ‘Well, it’s a good motivation for the anti-vaxxers to be forced to vaccinate.’ That doesn’t work for me as an ethicist. I support vaccines fully, but if people don’t want it, they don’t want it. It’s their body. And if they do decide to get it, it needs to be because it’s an act of free will. They should not be coerced into it. So I see a lot of negatives.”

The list of vaccines accepted and banned varies from nation to nation, which makes vaccine passports even more tricky to implement.

“I need to be in South Africa within the next year,” Bowman said. “I’m vaccinated with AstraZeneca. South Africans rejected AstraZeneca, so does that mean I have to take another vaccine? … Or if you want to go to the United States and you’ve got your [young, unvaccinated] children with you, how does that work? I have no idea.”

Prime Minister Justin Trudeau told Reuters in January that he opposed vaccine passports because they “could have real divisive impacts on community and country.” Yet in early May, Tourism Minister Melanie Joly said the government is working with international partners to develop a standardized vaccine certification for travel.

Francoise Baylis, a bioethics research professor at Dalhousie University, says the primary aim should be on domestic and international health, not the facilitation of travel.

“You have to stay focused on the population, not on individual wishes, saying, ‘I want to travel.’ That’s not what this is about, that’s not what it’s motivated by. The policy that gets developed may allow you to travel, but the focus has to remain on public health,” Baylis said in an interview.

Baylis believes proper policy must be more nuanced than giving every vaccinated person the right to travel everywhere.

Both Baylis and Bowman hope proof of vaccination doesn’t become a widespread requirement for Canadians at home.

“You shouldn’t need a passport for day-to-day activities,” Baylis said. “You actually need to find ways to accommodate people who are not vaccinated and will never be vaccinated for medical or other reasons. … You cannot just say to all these people, ‘For the rest of your life, stay in your home.’”

The CCLA said the privacy, mobility, equality, and liberty of Canadians would be compromised by a vaccine passport. The organization has serious concerns about “any effort by a Canadian government to mandate public disclosure of private health information.” “The concept of a vaccination passport is a troubling one” because “science doesn’t support their utility” and “they raise significant risks to rights and freedoms,” it says.

“Vaccine passports have the potential to create two tiers of citizens, both in domestic and international contexts depending on how and when they are used. The Charter of Rights and Freedoms probably prevents governments from legally requiring all citizens to receive a vaccine. However, by creating vaccine passports, governments threaten to do indirectly essentially the same thing,” Pardy told The Epoch Times.

“Vaccine passports will enable businesses, institutions, and foreign governments to bar unvaccinated persons from entry, thus making vaccination practically necessary to function in society—even though it may remain technically voluntary,” he explains.

“By creating vaccine passports, governments will do indirectly what they cannot do directly.”

A May 19 joint statement by the federal, provincial, and territorial privacy commissioners states that “public and private sector entities that require or request individuals to present a vaccine passport in order to receive services or enter premises must ensure that they have the legal authority to make such a demand or request.”

They noted that Quebec laws would be especially stringent regarding passports, so that “requesting their presentation would require that the information is necessary to achieve a specific purpose, one that is serious and legitimate.”

The commissioners add that “vaccine passports must be decommissioned if, at any time, it is determined that they are not a necessary, effective or proportionate response to address their public health purposes.”

The commissioners also believe that vaccine passport data should be destroyed and the passports themselves decommissioned when they are no longer needed, but Bowman doubts that would ever happen.

“There’s no way it’s going to be deleted, and if it was, there would be no control over the information from a global point of view. … [COVID-19] could always resurface, so I don’t see an endpoint.”