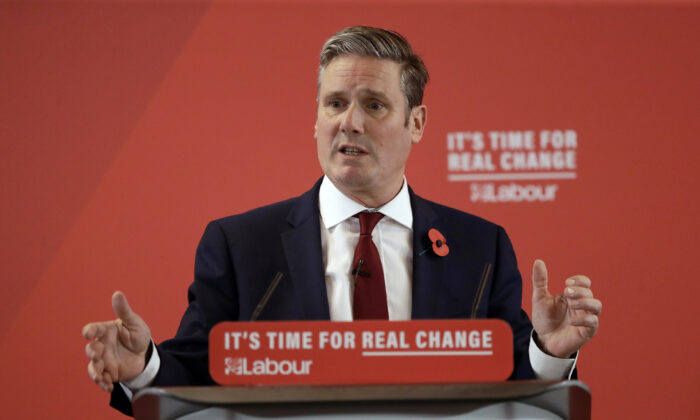 Requiring vaccine passports for social activities would be against the “British instinct,” the leader of the UK’s main opposition Labour party has said.

In an interview with The Telegraph published on Thursday, Sir Keir Starmer said vaccine passports is an “extremely difficult” issue and there is no “clear black and white, yes-no easy answer” on it.

“My instinct is that … [if] we get the virus properly under control, the death rates are near zero, hospital admissions very, very low, that the British instinct in those circumstances will be against vaccine passports,” he said.

Prime Minister Boris Johnson said last week that “no decisions have been taken at all” on whether or not a CCP (Chinese Communist Party) virus “vaccination certification” would be introduced.

He said the government still had to “think carefully” about the “moral complexities” and “ethical problems” surrounding the issue.

When answering questions from MPs on March 24, Johnson said it might be “up to individual publicans and landlords” to decide if a vaccine certificate is required to enter a pub.

Starmer said he would object to the idea, saying, “I think this idea that we sort of outsource this to individual landlords is just wrong in principle.”

The British pub industry has also voiced opposition to this idea. Industry representatives wrote to the prime minister on Thursday to express their “incredulity at the government’s stealthy backsliding on pub reopening rules.”

In the letter, UK Hospitality (UKH), the British Beer & Pub Association (BBPA), and the British Institute of Innkeepers (BII) expressed their “outrage” at the suggestion that the hospitality industry could be burdened with COVID-19 vaccine passports and other possible measures.

“This could prevent millions of young people visiting the pub for months, unless they get themselves tested in advance.”

“Pubs will already be trading at a loss when they reopen with all the existing restrictions and COVID-secure measures in place. Adding further disproportionate and discriminatory measures threatens the very survival of thousands of businesses,” they said.

Since then, Zahawi and several other ministers, including senior cabinet minister Michael Gove and Health Secretary Matt Hancock, have repeatedly denied the government had plans to introduce such documents.

Johnson also ruled out the idea on Feb. 15. But one week later, he suggested he could see the case for passports. “I know fervent libertarians will object, but other people will think that there is a case for it,” he told the media on Feb. 23.

Johnson said that he had asked Gove to conduct a “proper review” on the issue of domestic vaccine passports and get “the best scientific, moral, philosophical, ethical viewpoints on it.”

The leader of the Liberal Democrats Ed Davey this week branded the use of COVID-19 passports within the UK as “illiberal” and “unworkable.”

The plans are also opposed by some lawmakers in Johnson’s own Conservative party.