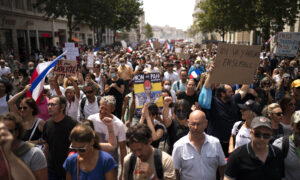 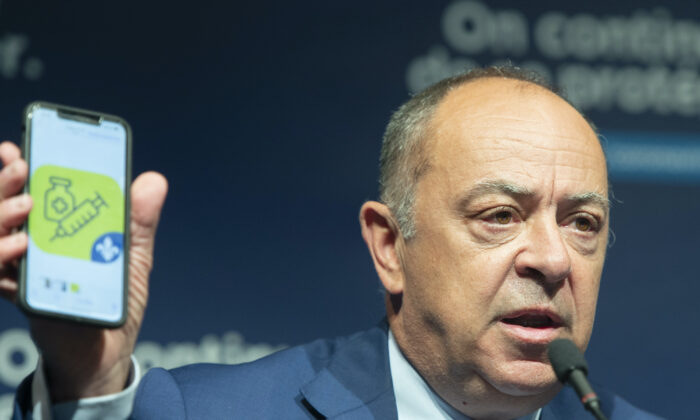 Quebec Health Minister Christian Dube shows an app on his phone as he announces details of the COVID-19 vaccination passport during a news conference Tuesday, August 10, 2021 in Montreal.THE CANADIAN PRESS/Ryan Remiorz
Canada

As Quebec becomes the first province in Canada to require vaccination passports for access to non-essential services like gyms, bars, and restaurants, Ontario Premier Doug Ford has rejected the idea of vaccine passports, saying “we aren’t going to have a split society.”

Premier François Legault said on Aug. 5 that Quebec will go ahead with issuing the passports to those who are adequately vaccinated against the virus with two doses, noting that the province is facing a fourth wave of the virus. Expected to be in circulation by Sept. 1, the passport will be a free official document showing that the holder is protected against COVID-19.

Constitutional expert and Queen’s University law professor Bruce Pardy says Legault’s plan to impose vaccine passports in his province presents “a huge issue with twists and turns,” but notes that for all intents and purposes, it’s a soft mandate.

“Technically, vaccine passports do not make vaccines mandatory, but in practice they virtually do. The government thus does indirectly what it may not be able to do directly,” he explained in an interview.

Pardy said such mandates have the potential for conflict with privacy rights and individual freedoms, but the courts may not see it that way.

“One would like to think that mandatory vaccines would violate Charter rights, in particular Section 7 rights to ‘life, liberty, and security of the person,’ but so far courts have generally been unsympathetic to Charter challenges to draconian COVID rules.”

Adam Skelly, who opened his Toronto BBQ restaurant in November 2020 in defiance of public health orders, launched a constitutional challenge of the lockdown that shut down his business but had it thrown out of Ontario Superior Court on June 28.

Church leaders who defied public health orders or challenged them in court have also been at the losing end, including GraceLife pastor James Coates. Coates, who went to jail twice for violating public health orders by opening his church, launched a Charter challenge but it was dismissed on June 7 by the Alberta provincial court.

“Under Section 1, Charter rights are subject to ‘reasonable limits prescribed by law as can be demonstrably justified in a free and democratic society,’ which has become an exception wide enough to drive a truck through,” said Pardy.

“So whether vaccine passports would breach those rights is an open question, especially if all governments do is make it possible for people to establish their vaccination status so that private businesses can insist upon it. Again, the government would be achieving indirectly what might be more difficult to do directly.”

Last month, the Ontario COVID-19 Science Table issued a brief recommending “COVID-19 vaccine certificates.” Ford, however, told reporters that while he wants everyone to be vaccinated, he’s “not in favour of a mandatory certification.” “We aren’t doing it, simple as that,” he said. “We aren’t going to have a split society.”

On Aug. 9, Nova Scotia Liberal leader Iain Rankin said if his incumbent government is re-elected when the province’s voters go to the polls on Aug. 17, he will bring in a mandatory passport system similar to Quebec’s for “high-risk areas of spread,” such as restaurants.

Meanwhile, Prime Minister Justin Trudeau said on Aug. 5 that vaccination may be made mandatory for not only federal public servants but for all employees in federally regulated industries.

Lisa Bildy, a lawyer with the Justice Centre for Constitutional Freedoms, says restricting access to services, including pressuring people to accept a vaccination for a disease that may present very little risk to them personally, distorts the idea of making educated personal health choices.

“Although the Quebec government said [vaccine passports] would not be mandated for essential services, there’s still a risk that it will be a form of soft coercion, impacting on people’s ability to exercise meaningful informed consent,” Bildy told The Epoch Times.

“It seems that young people, who have a risk of severe outcomes from COVID that is almost nil, are being pressured to get the vaccine to regain their freedom to enjoy normal life, even if it means taking a vaccine that they don’t personally feel is necessary for their own health.”

Federal government data show that as of Aug. 9, 552,905 recorded cases of COVID-19 among the population of people from 0 to 29 years of age resulted in just 81 fatalities. Among the 26,591 recorded deaths attributable to the disease in Canada as of Aug. 6, just 1,574, or about 6 percent, occurred among infected people 59 and younger.

Bildy notes that recent concerns about vaccine efficacy in terms of preventing infection or re-infection also makes vaccine passports and any mandates for those such as students, teachers, or health-care professionals highly questionable.

“The Charter of Rights and Freedoms is supposed to protect Canadians from unjustified state intrusion into their personal autonomy, and there’s a line that may be crossed with vaccine mandates as they intrude into the legal protection for Canadians’ bodily integrity, privacy, and the right to provide informed consent to medical procedures,” she said.

“The government has the burden of justifying this intrusion and must balance the harms. If these vaccines are really only effective at reducing the likelihood of severe outcomes in those who take them but do not fully stop transmission to other people, then I would question whether vaccine mandates and passports can be justified.”

On Aug. 9, the federal government reopened the borders with the United States to allow entry into Canada for discretionary travel but only for U.S. citizens and permanent residents who provide proof of full vaccination. Ottawa will tentatively extend that to other foreign nationals who are fully vaccinated on Sept. 7.