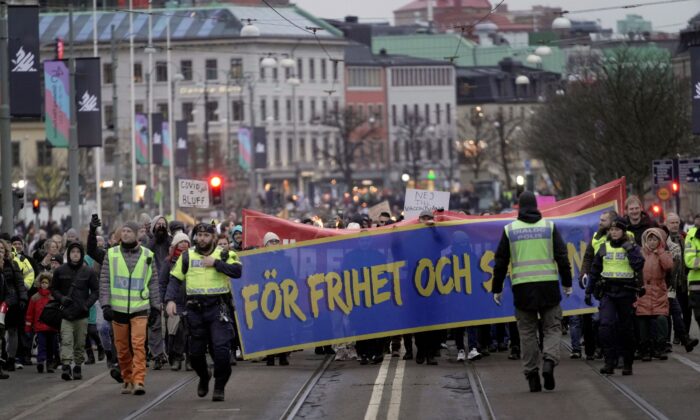 Protestors march as they demonstrate against the COVID-19 measures in Gothenburg, Sweden, on Jan. 22, 2022. (Bjorn Larsson Rosvall/TT News Agency via AP)
Europe

HELSINKI—Thousands of people gathered in European capitals Saturday to protest vaccine passports and other requirements governments have imposed in hopes of ending the COVID-19 pandemic.

In Sweden, where vaccine certificates are required to attend indoor events with more than 50 people, some 3,000 demonstrators marched through central Stockholm and assembled in a main square for a protest organized by the Frihetsrorelsen—or Freedom Movement.

A similar demonstration with some 1,000 participants was held also in Goteborg, Sweden’s second-largest city.

Police said some 4,000 people marched Saturday through the streets of central Helsinki to protest. A group called World Wide Demonstration organized the demonstration. No unrest or violence was reported to the police.