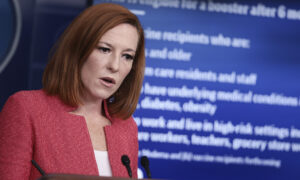 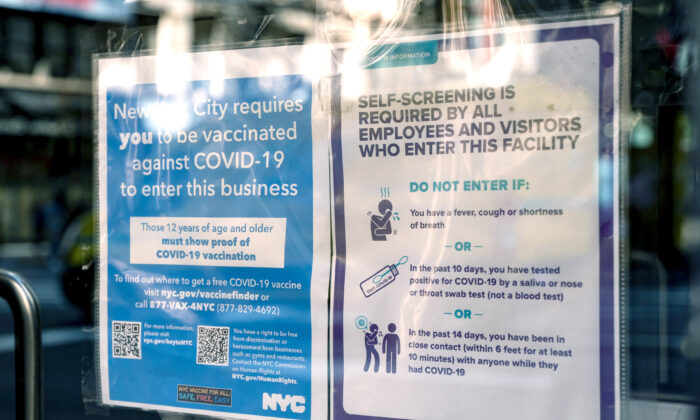 A vaccine proof requirement note is displayed on a restaurant storefront in New York on Sept. 7, 2021. (Chung I Ho/The Epoch Times)
Viewpoints

An unlikely silver lining is emerging from the acrimony that COVID-19 vaccine mandates have created: a fracture on the left that, if pressed, threatens to either break the morally, legally, and ethically dubious mandates or a core pillar of the woke regime.

Consider a recent story out of New York City, home to one of the most draconian coronavirus responses in the country.

A skirmish broke out on the Upper West Side at a popular Italian restaurant, Carmine’s, that seems to have hinged in part on the city’s recently implemented rule requiring diners to show proof of vaccination if they wish to eat inside.

According to reports, a brawl broke out between a hostess and several black patrons over this issue, three of whom were charged with assault and criminal mischief.

Accounts of what transpired differ, but lawyers for both Carmine’s and the three women arrested reportedly agree that the altercation occurred after two men who were not carrying proof of vaccination attempted to join this group of women at the restaurant.

The restaurant denied that story.

The BLM chapter’s co-founder, Chivona Newsome, had some choice words.

“Seventy-two percent of black people in this city from ages 18 to 44 are unvaccinated,” she said. “So what is going to stop the Gestapo, I mean the NYPD, from rounding up black people, from snatching them off the train, off the bus?”

Offensive as the comparison is, as recent images from Australia make clear, one could conceive of cops being forced into just such a position in the way of demanding papers or detaining people. The West has taken on a dystopic character in these last 18 months under the banner of public health.

Newsome didn’t stop there. She said: “We’re putting this city on notice that your mandate will not be another racist social distance practice. Black people are not going to stand by, or you will see another uprising. And that is not a threat. That is a promise. … The vaccination passport is not a free passport to racism.”

The co-founder of the Black Women’s March, Kimberly Bernard, added: “We are serving notice on the mayor, on the governor, on the restaurant industry that we will not allow for you to use this pandemic, vaccination cards, and masks as another reason to be racist, to put us in prison—because there’s enough of us in there.”

The rhetoric may seem hyperbolic, but the underlying logic holds. Black New Yorkers lag all other race/ethnicity groups for which the city provides data in terms of vaccination rates. Therefore, they stand to be disproportionately targeted as New York requires proof of vaccination to partake in the most basic aspects of everyday life.

This tracks with the national data on vaccination rates as well. According to the Kaiser Family Foundation, across 43 states, “the percent of White people who have received at least one COVID-19 vaccine dose (53%) was 1.2 times higher than the rate for Black people (45%).” The black population also lags the Hispanic population across these states.

Why is the disparity in vaccination rates significant? Well, it would stand to reason that if restaurants in New York, and perhaps businesses across the country, are going to be forced by the government to mandate that employees and patrons be vaccinated, then this burden will fall most heavily on blacks.

And by the standard of not just the most radical of so-called anti-racists, but most of the left, this would stand as government-enforced bigotry.

As the doyen of anti-racism Ibram X. Kendi puts it, racist policies are “any measure that produces or sustains racial inequity between racial groups.”

Given the relative vaccination rates among people of different races, how could mandates do anything but produce or sustain racial inequity between racial groups?

These mandates have a “disparate impact” in the terminology of the relatively less radical legal left.

If vaccine mandates generate inequity—if they have a disparate impact—this presents a paradox for the left that on the one hand is devoted to an agenda of coercive coronavirus policies, but on the other embraces wokeism.

Either vaccine mandates are racist, or disparate impact isn’t evidence of racism.

The left can’t have it both ways.

Benjamin Weingarten
Follow
Ben Weingarten is a fellow of the Claremont Institute and co-host of the Edmund Burke Foundation’s “The NatCon Squad.” He is the author of “American Ingrate: Ilhan Omar and the Progressive-Islamist Takeover of the Democratic Party.”
TOP NEWS