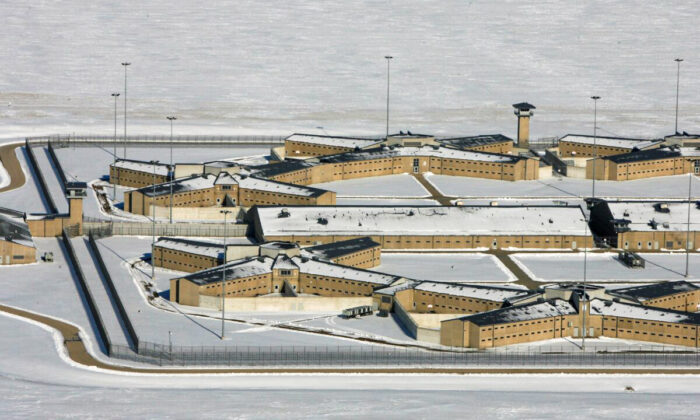 The Thomson Correctional Facility is seen on Dec. 15, 2009, in Thompson, Illinois. (Photo by Jeff Haynes/Getty Images)
By Cara Ding

As state and federal vaccination deadlines near, prison staff remain some of the most reluctant government workers to get the anti-COVID-19 shots.

At the same time, organizations that advocated for mass releases of prisoners during the height of pandemic have seized the opportunity to push for more.

Across 50 state prisons in New York, 55 percent of staff have reported to be fully vaccinated by Nov. 8.  Statewide it is 67 percent.

In Illinois, less than half of prison staff have reported to be fully vaccinated by Oct. 28, whereas 70 percent of inmates are.

In California, around half of prison staff didn’t get vaccinated by the Oct. 14 deadline.

Governor Newsom joined California Department of Corrections and Rehabilitation to ask a federal judge to pause the mandate.

Their lawyers argued that around 2,000 staff nearing retirement could walk out of the prisons tomorrow if they want to, according to Los Angeles Times.

Filling those positions would be hard as fewer applicants came in during the pandemic, they added.

At the federal level, the largest union that represents federal prison workers—the American Federation of Government Employees Council of Prison Locals—filed a lawsuit against President Joe Biden over the vaccine mandate on Oct. 30.

In early November, the union organized a nationwide protest to heighten awareness of the staff shortage, overtime hours, and potential impact of the vaccine mandate at federal prisons.

Alan Mills, executive director of Uptown People’s Law Center in Chicago, said there are two reasons why the vaccination rate among prison staff is much lower than that of the general population.

Mills said that prison work typically attracts the macho type of people who don’t like to be told what to do, or think they are tough enough to beat the virus on their own.

Secondly, most of the prisons are located in rural areas where people are generally less willing to get vaccinated than those in urban areas.

Though the vaccination rates among prison staff remain low, he predicts they will climb as more staff reach the point of choosing between their jobs, or the vaccination.

“It really depends on how strong your opposition is,” he told The Epoch Times.

During the height of the pandemic, Mills and others pushed for mass releases of prisoners across the country, saying prisons were COVID-19 hotspots and posed great health risks to those living and working there.

Almost every state reduced its prison population in 2020, many continuing to do so in 2021.

Now, Mills is asking for even more releases in face of the low vaccination rate among prison workers and the potential for staffing shortages.