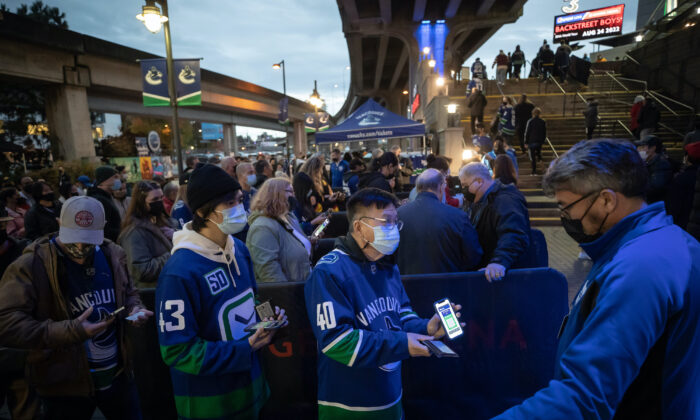 A fan shows his vaccine passport before entering Rogers Arena for the Vancouver Canucks NHL hockey game against the Minnesota Wild in Vancouver on Oct. 26, 2021. (The Canadian Press/Darryl Dyck)
Viewpoints

Vaccine Mandates: How ‘Moral Panic’ Has Diminished Our Civil Liberties

Call me a bit slow off the mark, but it wasn’t until toward the end of September when I sensed the shift of COVID-19 from a medical pandemic to a moral panic.

The obvious catalyst was the advent of vaccine mandates, which turned the “miraculous” prospect of protection from the virus into a means for effectively compelling obedience for obedience’s sake. Any notion of choice in getting vaccinated was vitiated by an instantaneous imperative for social conformity, which rivalled forms of religious shunning in ferocity and implacability.

Even appeals to charter-guaranteed rights and freedoms weren’t met with rational counterargument and compelling evidence of the greater good being served. They began to be dismissed with crankiness gusting to contempt for those making them. Those who raised voices of caution about threats to liberty were ranked as outcasts even when they were duly double-vaccinated.

The epitome was leading Globe and Mail columnist John Ibbitson’s Sept. 30 post-election analysis, which he devoted to demanding that MPs—i.e. newly elected members of the Conservative caucus—resign immediately if they refused to be inoculated instantly. This went even further than the opposition Bloc Québécois demand that such members be refused entrance to the House of Commons. Too much of a half-measure, Ibbitson argued, before declaring such refuseniks a “menace” to the population, especially children. Menaces, even those whose danger is only presumed and not even evident, apparently have no place in formulating federal laws.

Now, of course as an opinion columnist of long-standing and high achievement, John Ibbitson is clearly entitled to write what he likes within the general bounds of rules against slander, blasphemy, and poor sportsmanship. Nor is my intention to single him out as an egregious example. On the contrary, his no-quarters condemnation of purported vaccine rebels was of a piece with the preponderance of political, public, and media attitudes. Indeed, he effectively summarized such thinking when he wrote in the column in question: “There may be MPs who believe that refusing to receive the vaccine is an assertion of liberty. Sure, whatever.”

Sure, whatever. Think about the thinking enveloping the word “whatever.” Now think about it coming after the word liberty. Elide, if you like, the word “sure” and you will get: “Liberty. Whatever.” Really?

Here we have a thoughtful mind joining a synonym for freedom to a contemptuous brushing aside of those claiming liberty’s protection. Such a conjunction, by no means limited to John Ibbitson, serves, in my understanding, as a hallmark of moral panic. The social science term is generally defined as a fearful assumption suddenly widespread within a population that a certain cultural practice or specific group represents some form of deviancy inherently, if inexplicably, dangerous to the functioning of society. Some call it by the name of scapegoating.

The very impulse to compel every Canadian to accept vaccination seems a classic case of such fearful assumption. It rests, for starters, on the illogic of panic by which vaccination is unequivocally essential to proper protection of the citizenry and, simultaneously, that those who are unvaccinated represent an imminent threat to the vaccinated. If vaccination is protection, after a certain threshold, how can the diminishing number of unprotected threaten the overwhelming number of protected? One way, of course, is if vaccines actually aren’t protective, in which case, well, you see where that circle leads.

At this point, I have to engage an element of moral panic ritual and declare, yet again, that I am double-vaccinated and will happily accept a booster shot if needed. I would like 100 percent of eligible Canadians to be vaccinated. I must admit I don’t fully understand vaccine hesitancy or opposition given, as Charles Eisenberg has written in an American context, that we aren’t turning into zombies in the streets despite the hundreds of millions now vaccinated.

But I don’t have to, do I? Or, put another way, it isn’t incumbent on COVID vaccine opposers to ensure I understand if their decision is a function of their liberty. It would have been a fair debate, particularly in the context of a medical pandemic, whether that is—or should be—a decision functional to their liberty. The problem is, it’s not a debate we had.

We went from assurances that mandatory vaccination and concomitant proof-of-vaccination for public activities would never be imposed in violation of Canadians’ liberties, to the abrupt issuing of fiats and deadlines and threats of job loss. Liberty? Whatever. To anyone watching clear-eyed, one cause of this remarkable transformation over the course of a short summer was cynical political power-mongering at all levels of governance. But a second catalyst, it’s now evident, was a populace stampeding from individual fear to outright public moral panic.

With grace and luck, now that the pandemic is giving way to endemic COVID, the panic too will subside and civil liberty will be restored—dented, but not a write-off. A worst-case scenario, on the other hand, would be Canada fully vaccinated with once-charter-guaranteed freedoms redefined as “whatever.”