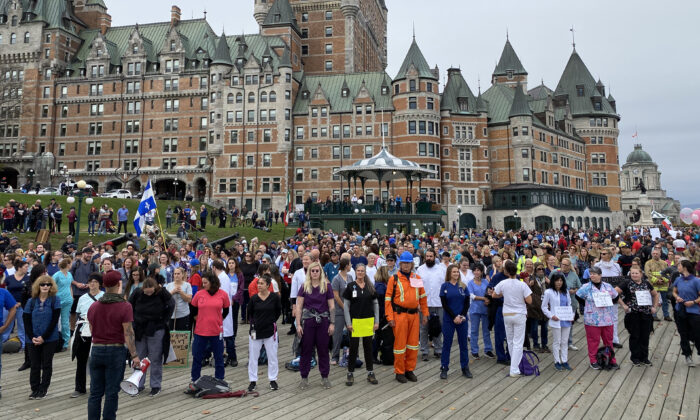 Vaccine mandates are being imperiled as intransigent workers ignore approaching deadlines. Labour unions are pushing back against vaccine mandates in some cases, while informal employee organizations are standing up for unvaccinated workers when unions won’t.

Companies and governments are facing a choice between firing thousands of workers or backing off on their vaccination deadlines. Many are backing off.

It’s easy for employers and governments to talk tough and draw lines in the sand with vaccine mandates. It is proving much more difficult to enforce these mandates in reality. Very few industries can suddenly dismiss five or ten percent of their workforce without serious disruptions to their operations.

Canada is in the midst of a labour shortage already. Finding skilled replacement workers after having fired thousands will prove difficult for employers, if not impossible, and they are re-evaluating vaccine mandates in light of this.

Faced with the prospect of a collapse in their health care system, Quebec’s government blinked and moved the deadline to Nov. 15.

With nurses and other health-related workers already in short supply, it would’ve been a catastrophe to suddenly fire tens of thousands of them. There is little indication the unvaccinated will relent by mid-November, and the Quebec government will be facing a hard choice again soon.

Supply chains have proven fragile and troubled throughout the pandemic as ships worldwide languish offshore, awaiting the ability to load and unload their products.

In Canada, dock workers are considered federally regulated workers under Transport Canada. That means they are subject to federal vaccine mandates. British Columbia’s longshore union has made it clear they will not put up with their members being threatened with mandatory vaccinations.

In a letter to the federal government, the union told the government to mind its own business on the matter, and I suspect the government will. If B.C.’s 7,200 longshore union members began even minor labour actions, disruptions to the distribution of consumer goods across Canada would be immediate and costly.

In the United States, Southwest Airlines was forced to relent on their steadfast vaccine mandate due to unofficial labour action from their staff. While both the airline and the union deny it, it’s clear it was more than weather issues that led to thousands of flights suddenly being cancelled over one weekend in early October.

If labour actions didn’t cause the flight disruptions, why did Southwest suddenly back off on their threat to put unvaccinated workers on unpaid leave? It’s not hard to read between those lines.

In Canada, airline workers opposed to mandatory vaccination are organizing without union support. A group calling itself “Free to Fly” claims to have more than 2,500 airline professionals signed on, and plans to actively oppose vaccine mandates. Airline professionals can’t be replaced quickly, and if even a small number of them begin labour action, transportation in Canada could be crippled.

Among emergency services, the RCMP union has stated it will support members who choose not to be vaccinated. In Alberta, firefighters and paramedics are organized under a group called “Fight for the Frontline,” and are challenging vaccine mandates. Last week, they threatened to take Alberta Health Services to court over its vaccine mandate for frontline health-care workers.

Are governments prepared to terminate the employment of thousands of emergency response workers? Will the public accept shortages of those critical services on a point of vaccination principle? If your home is burning down, I doubt the vaccination status of the firefighters responding will be your primary concern.

There is a sizable segment of the population who will not get vaccinated under any circumstances. While figures such as five percent or ten percent sound small, they amount to hundreds of thousands of workers across the country. Employers in both the private and public sectors need to face reality and make plans to accommodate workers to choose not to be vaccinated.

Canada’s economy is already in a precarious position while our health care systems are overloaded. Vaccine advocates need to temper their zeal and understand that putting hundreds of thousands of Canadians out of work over their vaccination status will cause damage we can ill afford to suffer right now.

Both formally and informally, workers are organizing against vaccine mandates. Rather than constantly extending vaccination deadlines, employers would be well served to start negotiating compromises.