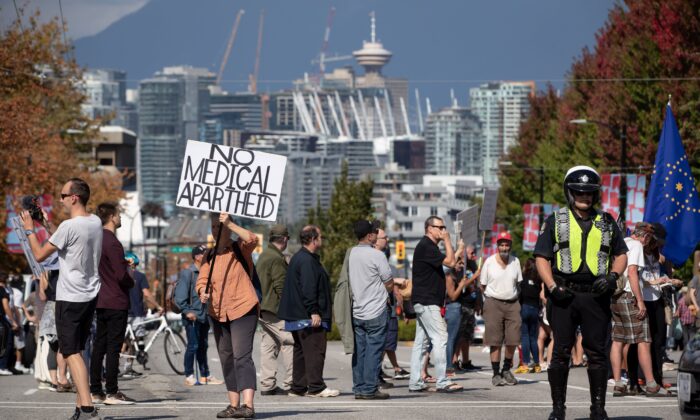 A police officer stands by as people attend a rally and march against COVID-19 vaccination mandates and public health measures, in Vancouver on Sept. 8, 2021. (The Canadian Press/Darryl Dyck)
Viewpoints

Vaccine Mandates: A Question of Ethics

Various vaccine mandates imposed across Canada are proving to be contentious, conflicting, and legally dubious. Medical mandates are ethically spurious in a constitutional democracy, and ethics is fundamental to these new and divisive policies.

Those who have been following the issue may have come across Julie Ponesse, an ethics professor at Ontario’s Huron University College who was placed on unpaid leave after refusing to comply with the college’s mandatory vaccination policy.

She has appeared on a number of podcasts talking about her area of expertise and how it applies to current vaccine policies. They are worth a listen. She is decidedly tempered and composed, and ardently pro-choice when it comes to bodily autonomy.

Her argument is not against vaccination; it’s whether Canada, as a constitutional democracy should be mandating medical interventions. The right to exercise bodily sovereignty separates a free society that honours the individual, from a totalitarian state where every citizen is the property of the government. Mandatory medical intervention is fundamentally a question of ethics, one that should concern every Canadian regardless of vaccination status.

For all of the laws that make up a nation, ethics are the most objective and reliable means of successfully guiding policy. They honour the individual, their autonomy, and their capacity to act with integrity and morality. It is the heart and soul of the socratic method and, until recently, the scientific method.

A glaring omission from the vaccine mandate narrative has been open debate and public discourse. Some may make the case that these are extraordinary times that require extraordinary measures, so entertaining any contradictory point of view would only exacerbate an already difficult problem. Indeed, that seems to be the consensus among politicians and the legacy media.

To give the benefit of the doubt, this may be motivated by an altruistic if misguided attempt to expeditiously “get us back to normal.” But while it is one thing to convince people of the efficacy and safety of a medical intervention, it is quite another to coerce. There are many who took the vaccine out of a sense of duty to support their community. This is an admirable and selfless act that should be acknowledged as such. Others have been backed into a corner over the threat of job loss. These are two distinctly different actions. One is altruistic at heart, the other a result of intimidation.

Any public health policy that doesn’t take into consideration emerging, well-sourced data is doomed to fail in the long run. If we’ve learned anything over the past two years it is that we need to be agile and open to new information when navigating a complicated, evolving crisis.

Evidence of waning vaccine efficacy has been mounting in the UK and Israel, both of which are further along in their vaccine rollout. Recently, The Lancet medical journal published a study that showed fully vaccinated people who came down with COVID infected others in their household at about the same rate as the unvaccinated. The vaccinated also had an equivalent viral load in their upper respiratory tract, making the infection equally transmissible.

The vaccines themselves are non-sterilizing, meaning they may prevent the recipient from developing serious illness but do not stop infection or transmission. This is an important distinction because it goes right to the heart of the mandate question. If the vaccines do not prevent the spread of COVID, what logic is there in making them mandatory? If you add the proven robustness of widespread natural immunity to the equation, it is even harder to justify. The U.S. Centers for Disease Control and Prevention estimates that 146 million Americans have had prior infection and, by virtue, natural immunity.

Many well-credentialled scientists have been raising medical and ethical concerns around blanket vaccination policies, Canadian virologist Byram Bridle among them. They have faced immense pressure to keep silent on anything that goes against the official narrative that 100 percent vaccination is the only way to end the pandemic. The consequences of speaking out have been so severe that like-minded doctors and scientists have chosen to remain silent lest they lose their professional interests, or even their livelihoods. How did it come to this in our free country?

The point is not whether these scientists are correct in their concerns, only that they are not allowed to air them. Debating dissenting opinions on their merits is bound to be contentious and messy, but absolutely necessary to restore confidence in our public health system. Too often, health authorities have presented their own consensus as settled science rather than honour the spirit of the scientific method through sincere debate with qualified experts.

From two weeks to flatten the curve to two jabs or you lose your job, Canadians need to realize that the principles at play here go much deeper than a vaccine. It is about the civil liberties, ethics, and constitutional framework that form the social and legal backbone of this country.

As a nation we need the grace and compassion to realize that this pandemic has been hard on everyone. All of us have sacrificed much and faced impossible decisions never imaginable two years ago. And we are not alone. The entire planet is engulfed in the same struggle. This is now a question of humanity, one that transcends borders, politics and ideology. If we can see it as such, this may become the silver lining in COVID’s persistent dark cloud.