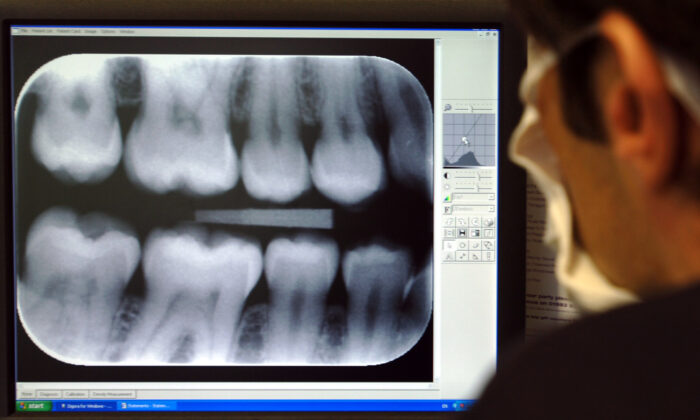 The UK government’s decision to impose mandatory COVID-19 vaccination on healthcare workers could have a “devastating” consequence on already stretched dental services, leading doctors have warned.

The British Dental Association (BDA) warned on Friday that the vaccine mandate risks “dropping a bomb on a service already stretched to breaking point,” as thousands of dental staff may be pushed out of the workforce.

The government has railroaded mandatory vaccination for health & care workers through parliament.

But this plan will devastate a dental workforce already stretched to breaking point.

A BDA survey of 1,642 high street dentists operating in England found that 1 in 10 of them are not fully vaccinated, with 9 percent reporting that they have not had their first dose of the CCP (Chinese Communist Party) virus vaccine.

About two-thirds (66 percent) of respondents estimate all dentists operating in their practices are fully vaccinated, with less than half (48.4 percent) saying the same for dental nurses, who are integral to supporting the delivery of care.

The survey found that 30 percent of respondents estimate dental nurses based at their practices will leave as a result of the mandate, with nearly 15 percent of dentists saying they will leave themselves.

BDA Chair Eddie Crouch said: “We now face a grim scenario where thousands of dental team members will walk as result of choices made by government, leaving thousands of vacancies that will never be filled.”

Under the UK government regulation, all frontline health and care staff need to be fully vaccinated against COVID-19 before April 1, or risk losing their jobs. The mandate is set to cover all registered health professionals, including dentists and their teams, in both the National Health Service (NHS) and private settings.

The BDA said that it has “long supported the vaccine rollout,” but said that the government “must think again about compulsion.”

Crouch said the vaccine mandate is “a blunt instrument, which will have devastating consequences for millions of patients across this country.”

According to the BDA, any exodus of staff will lead to consequences for patients, many of whom are already struggling to access care, with some being told that they will need to wait for three years for an appointment.