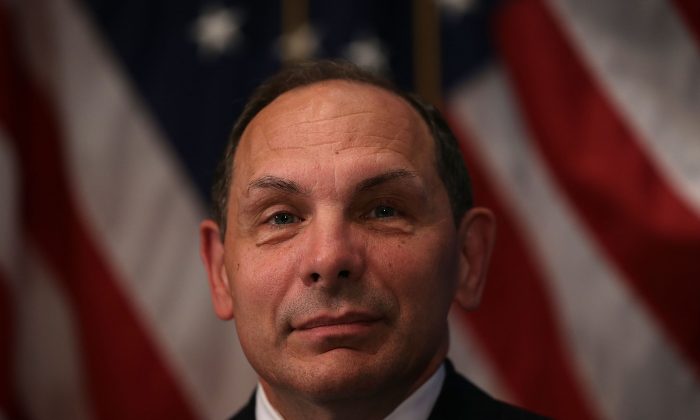 U.S. Secretary of Veterans Affairs Robert McDonald prior to his address at the National Press Club in Washington, D.C., on Nov. 6, 2015. (Alex Wong/Getty Images)
Politics

WASHINGTON—Though it has made much progress, the Department of Veterans Affairs is likely to miss its target on two ambitious goals: ending veteran homelessness in 2015 and ending the backlog in disability claims.

The latest count available showed about 50,000 homeless veterans on a single night in January 2014. That’s a decline of 33 percent from January 2010. Results from the January 2015 count are expected later this month.

The disability and pension claims backlog also is on a downward path, although not before the claims processing system became so overwhelmed that lawmakers and veterans groups demanded changes at the VA.

Those are the kind of trends that politicians would surely like to cite during election season.

Yet, as one crisis began to fade at the VA, another blossomed. Reports of thousands of veterans waiting months and sometimes years for health care have taken priority and colored the way all other issues are viewed.

Investigators looking into delayed care found that inappropriate scheduling practices were a nationwide systemic problem. More than a year after the scandal broke congressional Republicans want to know why the number of employees fired is so low. VA Secretary Robert McDonald faces complaints that he has overstated the number of employees disciplined.

The VA’s reputation suffered another blow earlier this month after two high-ranking officials refused to testify at a congressional hearing on allegations that they manipulated the agency’s hiring system for their own gain. Investigators say they forced lower-ranking regional managers to accept job transfers against their will and then stepped into those vacant positions, keeping their pay while reducing their responsibilities.

Veterans groups have always viewed the twin goals of ending homeless and the disability claim backlog with a healthy dose of reality. They’re generally encouraged by the trend lines.

“If you don’t meet your goals, it doesn’t necessarily mean failure,” said Joe Davis, a spokesman at Veterans of Foreign Wars. “You have to think big if you’re going to do big.”

The VA has been focused on getting the homeless into housing immediately and paying for it with a voucher that subsidizes most or all of the rent. The VA then works to provide the veterans with counseling, health care and other benefits.

In August, Connecticut became the first state to announce it had ended chronic homelessness among veterans. Officials said that means any veterans who had been homeless for more than a year or had four separate bouts of homelessness in recent years were either in permanent housing or on an immediate path to it. New Orleans, Houston and a few others have also made such declarations.

McDonald said last week that the end of the year was still the goal for ending veteran homelessness. The survey verifying that outcome won’t take place until January and takes almost a year to tabulate. McDonald said his focus is now on Los Angeles with an estimated 4,200 homeless veterans.

Earlier this year, the VA agreed to settle a lawsuit that requires it to develop a long-term master plan for turning a sprawling West Los Angeles VA campus into housing for homeless vets.

“For some ways for me, the clock didn’t start until we got that lawsuit settled, and we’re making a lot of good progress out there,” said McDonald, who was confirmed in July 2014.

Rep. Jeff Miller, the Republican chairman of the House Committee on Veterans’ Affairs, has been critical of the VA’s goal-setting strategy, which was driven by former Secretary Eric Shinseki’s belief that big goals were necessary to drive big changes.

The committee’s staff estimates that the VA’s spending on homelessness jumped from about $376 million in 2009 to about $1.5 billion last year.

“The fact that VA increases in spending on homeless initiatives are growing every year and far outpacing reductions in veteran homelessness calls into question the efficacy of VA’s efforts,” Miller said.

Progress on the disability claims backlog has been much more of a roller coaster. The backlog exploded in 2010 after the VA expanded the list of illnesses presumed to have been caused by Agent Orange.

That decision pumped about 260,000 claims into the system. The overall bottleneck grew exponentially when combined with other factors, such as the latest generation of veterans from Iraq and Afghanistan returning from war.

In March 2013, with the backlog peaking and a political crisis in full bloom, the VA ordered more than 10,000 workers to put in at least 20 hours of overtime each month.

McDonald said the agency completed 1.4 million claims this past fiscal year, the most in its history.

The budget for the VA has consistently increased in recent years. On Tuesday, the Senate passed a measure that contains funding to hire 770 additional VA claims processors to ease the claims backlog.