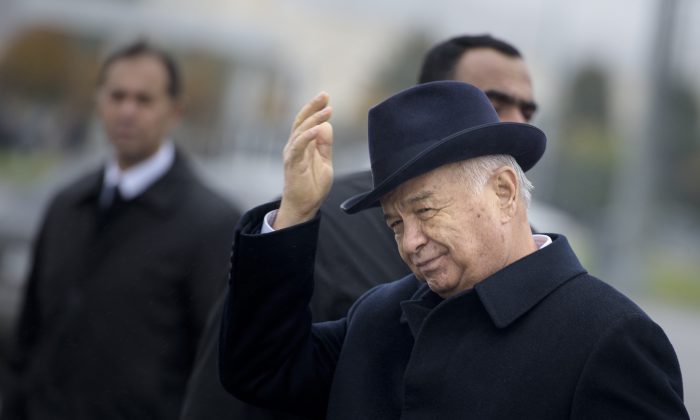 Uzbekistan’s leader Islam Karimov was confirmed dead on September 2 after reports surfaced last week that he was gravely ill.

Islam Karimov, 78, had been the authoritarian ruler of Uzbekistan since independence in 1991. His death creates many questions for a nation that has never lived under any other ruler.

Karimov had been hospitalized with a brain hemorrhage, according to his daughter’s Facebook page.

Rumors of Karimov’s death circulated for about a week in the absence of any specific information on the status of his health.

“They can’t even give us the concrete information. Even in death, Karimov is a wily fox,” said Steve Swerdlow, Central Asia researcher at Human Rights Watch, the day before Karimov’s death was announced.

Karimov’s eldest daughter, Gulnara Karimova, was once thought to be his heir but an apparent power struggle in late 2013, coupled with several money-laundering investigations abroad, led to Ms. Karimova being placed under house arrest.

This feud was thought to be part of a larger internal power struggle and caused a rupture in the Karimov family.

Karimov rose to prominence under Mikhail Gorbachev and was appointed the first secretary of the Uzbek Communist Party in 1989. The following year he became president of the Uzbek Soviet Socialist Republic when Uzbekistan gained greater autonomy from the USSR.

When Uzbekistan seceded from the Soviet Union at the end of the Cold War and declared independence, Karimov kept his grip on the country.

He’s remained in office by holding referendums to extend his term limits and held an election in 2015; he was elected president yet again. The opposition considered the vote to be illegitimate.

“He has been the only president Uzbekistan has ever seen. He’s viewed as a founding father type of figure in Uzbekistan,” said Stratfor Eurasia Analyst Eugene Chausovsky.

In countries that have only experienced one strongman ruler, oftentimes the death of the leader can cause internal chaos among the ruling party that can lead to civil strife.

Now that Karimov is dead there will be a transfer of power to the speaker of the senate, and in less than three months elections will be held, said Chausovsky.

“There are legal guidelines but that doesn’t mean it will play out that way. This is an unprecedented stage as there has never been a transfer of power.”

Given the unchartered territory the country is in, Uzbeks are likely to see now-familiar repression used as a way to maintain stability.

Uzbekistan is very clan based and there are opposition groups but Chausovsky expects a stable transition will leave the country in a similar state.

“I think we can expect to see a great deal of continuity,” he said.

Karimov’s rule produced one of the most repressive and dictatorial regimes in the world.

“Uzbekistan is stuck back in the dark ages in terms of human rights,” said Swerdlow.

Karimov denied citizens the freedoms of association, expression, and religion, utilizing the feared security forces to crush any dissent.

“Thousands of people are imprisoned on politically motivated charges, torture is endemic, and authorities regularly harass human rights activists, opposition members, and journalists,” according to a country report by Human Rights Watch.

The 2005 Andijan Massacre was one of the country’s worst human rights violations.

Government security forces shot and killed hundreds of unarmed people at public protests in the city of Andijan.

“The scale of this killing was so extensive, and its nature was so indiscriminate and disproportionate, that it can best be described as a massacre,” said the Human Rights Watch report.

The government tried to claim the protesters were Islamic extremists, like The Islamic Movement of Uzbekistan (IMU) that had committed acts of terror in the 1990s.

“The Andijan Massacre illustrates the man and the way he rules,” Swerdlow said.

“People innately or intuitively know what awaits them if they protest.”

Despite the repression, Karimov was supported by the majority of the Uzbek people.

“He does receive genuine support from a majority of the population,” said Chausovsky.

“There is a different paradigm in Central Asia. Stability and maintaining order have been a higher priority than a full fledged democracy.”

Despite his strongman status, Karimov has been a strategic partner for the United States in Central Asia.

“He played a pretty important role with NATO in Afghanistan, hosting an airbase and a logistical supply route, the Northern Distribution Network,” said Chausovsky.

The main artery of the Northern Distribution Network leading to Termez, Afghanistan ends in Uzbekistan.

The most vital non-lethal goods destined for U.S. troops passed through this network.

However, relations were not always cordial.

Washington criticized Karimov over the the 2005 Andijan Massacre and the dictator shut down the U.S. airbase in response.

Karimov was also skilled at playing a balancing act between the United States and Russia.

Uzbekistan is the only country that borders Afghanistan and all other Central Asian states.

“This plays into the U.S.-Russia dynamic,” said Chausovsky.

Most Central Asian states are involved in Russia’s military and economic bloc but Karimov kept Uzbekistan out of Russia’s direct orbit and continued cooperation with the U.S. while still purchasing weapons from Moscow.

The people of Uzbekistan and the international human rights community should not expect a new leader to lessen the repression seen in the Karimov era, said Swerdlow.

“Absent any pressure from the U.S. and E.U to press for human rights improvements, the next leader is likely to continue the same atrocious abuses that were committed under Karimov.”