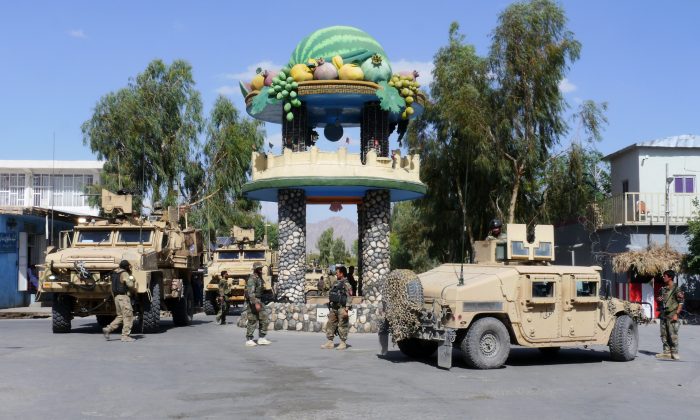 Afghan security forces patrol the town of Farah, after having driven the Taliban out, on May 19, 2018. (HAMEED KHAN/AFP/Getty Images)
US News

Uzbekistan’s ambassador to the United States, Javlon Vakhabov, confirmed his government “had very substantive talks” with a Taliban delegation visiting his nation last August, reportedly to discuss the Afghanistan peace process and withdrawal of foreign forces.

The Taliban, a fundamentalist Islamic dictatorship, held control of Afghanistan for the five years leading up to the al-Qaida attack against the United States on Sept. 11, 2001, until a U.S.-led coalition ousted them from power in response, and has battled them ever since.

Vakhabov’s remarks come as U.S. and Taliban negotiators had their highest-level meetings yet in their drive for a peace agreement in America’s longest war.

Asked what Uzbekistan was doing to prepare for the eventuality that the current Afghan government may not survive, Vakhabov reiterated the Uzbek government is focused on “figuring out” two issues: economic support for war-torn Afghanistan, and the ongoing peace process there.

In March 2018, the ambassador noted that the Uzbeks hosted a conference in Tashkent attended by U.S. Under Secretary of State for Political Affairs Thomas A. Shannon Jr.

The Tashkent conference followed a Kabul confab, at which Afghan President Ashraf Ghani laid out a potential process for ending the conflict.

In Tashkent, Shannon noted that “It is the violence of the Taliban that creates the instability that enables these terrorist groups to continue operating in Afghanistan,” saying the United States and its allies were “fully committed to ensuring that the Afghan government has the capabilities to deny the Taliban any military path to victory.”

Conference participants, Shannon said, could help by “prevent[ing] materiel, financial, or political support to the Taliban.”

The United States sought “a negotiated settlement that leads the Taliban to stop violence, break ties with all terrorist groups, and respect the Afghan constitution, including its protections for women and minorities,” according to Shannon.

Vakhabov argued the main goal of the Tashkent conference was to develop the “key principles for peace” in Afghanistan.

In July, following Tashkent, Americans expressed willingness to meet directly with the Taliban about ending the conflict, jettisoning a prior commitment such talks would include the current Afghan government.

Taliban officials also held three days of talks with the U.S. special representative for Afghanistan in Qatar, Zalmay Khalilzad, in November. A prior report from The Wall Street Journal suggested it was the second meeting in the preceding four months.

Both Taliban figures were among the five that the Obama administration released from Guantanamo Bay, Cuba, in 2014 in exchange for U.S. deserter Bowe Bergdahl.

Finally, on Feb. 25, U.S. officials began the highest-level talks yet with the Taliban, including with the jihadi organization’s deputy leader, Mullah Abdul Ghani Baradar. Prior talks stalled when Taliban representatives said they didn’t have the authority to discuss either a ceasefire or participation of the current Afghan government, both supposedly U.S. prerequisites for a deal.

Yet direct talks with the Taliban continue over Afghan objections.

According to professor Stephen B. Young, a Vietnam War-era official in the Office of Civil Operations and Rural Development Support, Americans negotiating with the Taliban “behind the backs of our allies” echoes the exclusion of South Vietnamese forces from the disastrous deal then-Nixon National Security Adviser Henry Kissinger struck with the Communist regime in Hanoi.

Young argues, “Kissinger had implied in his memoirs … Nixon did all this stuff.” But Young, who approached Nixon with what he had learned about Kissinger’s diplomacy based on a review of raw cables from the time, reports that Nixon “looked surprised—maybe even a little bit shocked.”

Nixon said, “No, I don’t remember any of this,” Young recalls, saying, “His face went grey.”

With respect to current negotiations with the Taliban, Young concludes, “The lesson is: Don’t cut out your allies. … If you cut your allies out against a determined ideological ally, you have basically turned against your country.”

Vakhabov stressed that his government’s talks with the Taliban took place after having consulted with and gained the approval of both Washington and the regime in Kabul.

“In this regard, Uzbek government endeavors are fully supported by the U.S. government—even supported by very our tough neighbors,” the Pakistanis and Iranians, whom Vakhabov reported were “very supportive.”

The Uzbek ambassador addressed a private luncheon at the offices of the World Trade Center of Washington in the Ronald Reagan Building and International Trade Center on Feb. 19.

Christopher C. Hull holds a doctorate in government from Georgetown University. He is president of Issue Management Inc., distinguished senior fellow at the Gatestone Institute, senior fellow at Americans for Intelligence Reform, and author of “Grassroots Rules” (Stanford, 2007).