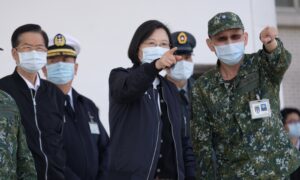 TAIPEI—On September 20, fighting broke out between students of Uygur nationality and Han nationality at Xinjiang Judicial Officer School. More than 10 people were injured and at least three to six people may have died in the clash based on an unverified source.

Hong Kong's Sing Tao Daily reported that with close physical contact between students of these two nationalities, the long-term tension ignited hostilities. Students used wooden and steel sticks and other weapons to beat each other. More than 10 people were injured and sent to hospital.

The paper cited an unverified report that a thousand students participated in the fighting on the evening of September 20, and that three people died that night and six more died the following day. One armed policeman who came to put down the riot also died in the turmoil.

However, a school staff member said in a telephone interview that when the incident ended, more than 10 injured students received medical attention, but he did not hear that anyone had died. The incident was not developed to the degree that armed police needed to be involved.

He said that the school has always paid attention to the nationality issue. Actually it is normal to have conflict among students, but it is a bit complicated in Xinjiang Province. Currently the school is still working on how to the handle the students involved in the incident.

Xinjiang Judicial Officer School is located in the eastern suburb of Xinjiang's Urumqi City. It trains students to be police officers working in prisons. Currently it has approximately one thousand students 15 to 16 years old.