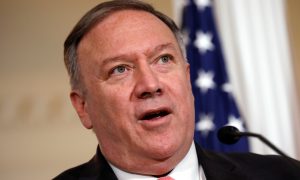 US Will Aim to Persuade Others to 'Call Out' China Over Uyghurs at UN: Pompeo
0
Share Now
TelegramFacebookTweetEmailTellMeWeReddit
Copy Link 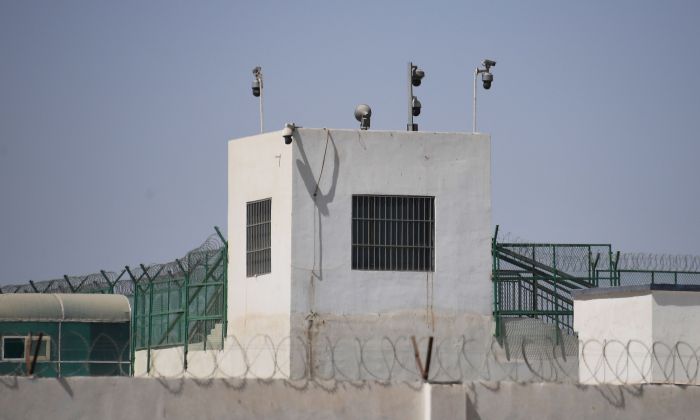 The outer wall of a complex which includes what is believed to be a re-education camp on the outskirts of Hotan, in China's northwestern Xinjiang region on May 31, 2019. (Greg Baker/AFP/Getty Images)
China Human Rights

Uyghurs detained in China’s so-called “re-education centers” in its northwestern Xinjiang region are being tortured and raped, a former detainee has revealed.

Sayragul Sauytbay, 43, said she witnessed the human rights abuses during her time in a facility between November 2017 and March 2018, where she was forced to teach Chinese and Communist Party propaganda to fellow detainees, before she was released and granted asylum in Sweden.

Sauytbay, a Muslim woman of Kazakh descent, is just one of at least one million Uyghurs and other ethnic minorities believed to be detained in China’s re-education facilities, which Beijing says are to “educate and transform” those whom the Chinese Communist Party (CCP) deems at risk of the “three evil forces” of “extremism, separatism, and terrorism.”

She told Haaretz she witnessed detainees being tortured by electric shock, with metal nails, and by having their fingernails pulled out. Detainees were deprived of food, forcibly given pills and injected with unknown substances. Sauytbay also recalled an instance where a female detainee was gang raped by several of the camp’s police officers in front of other inmates.

The 43-year-old said she is not certain of the camp’s exact location, as she was transported there with a black sack over her head. However, she estimates it held about 2,500 inmates ranging in age from 13 to 84, with a mixture of businessmen, writers, nurses and doctors, artists, schoolchildren, and workers.

Her testimony corroborates with previous interviews The Epoch Times conducted with former Uyghur detainees, who said they were subject to torture, forced to denounce their faith, and forced to pledge loyalty to the CCP while held for unknown reasons in often overcrowded facilities.

CCP officials say the mass detentions among the Uyghur population, the majority of whom practice Islam, are part of measures to crack down on terrorism, religious extremism, and separatism in the country. The CCP has used the excuse of potential “extremist threats” to justify its strict surveillance and crackdown on Uyghurs and other Muslim minority groups in the Xinjiang region.

First-hand accounts described to The Epoch Times have also revealed attempts by authorities to strip Uyghur detainees of their culture and language, forcing them to denounce their faith and pledge loyalty to the CCP and its leader. If detainees fail to follow orders, they may be subject to several forms of torture as punishment.

Sauytbay told Haaretz that Uyghur detainees were punished for “everything” in the facility in a room called the “black room.” Starting at 6 a.m., detainees learn Chinese and memorize propaganda songs, she said.

“Anyone who didn’t follow the rules was punished. Those who didn’t learn Chinese properly or who didn’t sing the songs were also punished.”

She said she knew of an elderly woman in the camp, who had been a shepherd before she was arrested by Xinjiang authorities for speaking to someone on the phone who lived abroad.

“This was a woman who not only did not have a phone, she didn’t even know how to use one,” Sauytbay said.

“On the page of sins the inmates were forced to fill out, she wrote that the call she had been accused of making never took place. In response, she was immediately punished. I saw her when she returned. She was covered with blood, she had no fingernails, and her skin was flayed.”

In the “black room,” Sauytbay said some detainees were “hung on the wall and beaten with electrified truncheons.”

“There were prisoners who were made to sit on a chair of nails. I saw people return from that room covered in blood. Some came back without fingernails.”

Sauytbay recalled a time when she was punished herself, after an elderly Kazakh detainee begged her for help.

“She begged me to get her out of there and she embraced me. I did not reciprocate her embrace, but I was punished anyway. I was beaten and deprived of food for two days.”

Up to 20 detainees were forced to stay in a single room of 16 square meters, and each inmate was only given two minutes a day to use the toilet, she said.

“There were cameras in their rooms, too, and also in the corridor. Each room had a plastic bucket for a toilet … and the bucket was emptied only once a day. If it filled up, you had to wait until the next day.”

“The prisoners wore uniforms and their heads were shaved. Their hands and feet were shackled all day, except when they had to write. Even in sleep they were shackled, and they were required to sleep on their right side—anyone who turned over was punished.”

Female detainees were treated particularly harshly, Sauytbay said, recalling “pretty girls” being taken by policemen on daily basis. “They didn’t come back to the rooms all night,” she recalled.

“The police had unlimited power. They could take whoever they wanted.”

She said a female detainee was told to confess her sins in front of 200 inmates, and say she had become a better person now that she had learned Chinese.

When she had finished, the policemen forced her to disrobe and “simply raped her one after the other, in front of everyone.”

“People who turned their head or closed their eyes, and those who looked angry or shocked, were taken away and we never saw them again. It was awful. I will never forget the feeling of helplessness, of not being able to help her. After that happened, it was hard for me to sleep at night.”

A 54-year-old former Uyghur detainee, Gulbakhar Jalilova, a Kazakhstan national, told The Epoch Times that young Uyghur women are being raped daily by CCP officials in the camps and could be killed if they resist.

“Young girls are taken out and raped all night long. If you keep resisting, they will inject you with something and kill you,” she said in a phone interview from Istanbul, Turkey.

Jalilova was detained for 15 months in an all-female camp in Xinjiang’s capital, Urumqi, and was released in September 2018.

Sauytbay said she was released in March 2018, and fled to Sweden with her husband and two children.

More than a year on, however, she said she will forever be haunted by the horrors she witnessed in the camp.

“I will never forget the camp,” she said. “I cannot forget the eyes of the prisoners, expecting me to do something for them. They are innocent.”

“I have to tell their story, to tell about the darkness they are in, about their suffering. The world must find a solution so that my people can live in peace.”