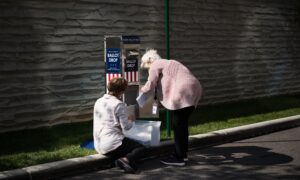 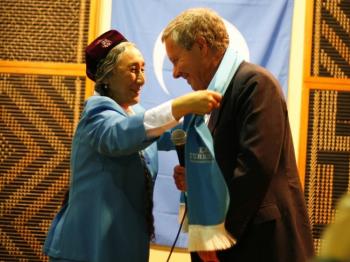 By Diane Cordemans
Print
NEW ZEALAND—Uyghur leader and campaigner Rebiya Kadeer says that the northwestern province of Xinjiang, China, is like an "open prison" for the Uyghur people. She is calling on the Chinese authorities to stop their "cultural genocide."

The exiled activist, who has been labeled a “terrorist” by the Chinese Communist Party, was speaking out to audiences at Auckland University and the Pioneer Women's Hall earlier this week.

Introducing Ms. Kadeer, Green Party member of parliament Keith Locke said that the Green Party's invitation to Rebiya Kadeer had raised questions over democracy, not only in China, but in New Zealand as well.

Mr. Locke said that Auckland University's initial refusal to allow Ms. Kadeer to speak on campus set a bad precedent. Everyone should be free to speak and debate ideas on university property, he said.

“We will [not] deny the students, the lecturers and people of Auckland the right to hear her on university property when the universities are supposed to be a place for open debate where all ideas can be expressed.

A room that had been booked at the university for Ms Kadeer's meeting was cancelled by the university administration. Professor David Williams from the law department advised the vice chancellor that this action would 'damage the university and it's reputation' and another room on campus was arranged.

The Uyghur leader, who has been accused by the Chinese government of inciting ethnic unrest, is hoping that New Zealand's government will ask the United Nations to send an investigation team to Xinjiang to look at what is really happening.

Amnesty International says that it has documented the death of at least 200 people and that 1,600 people who were injured during ethnic unrest in the Xinjiang City of Urumqi in July this year.

Discrimination is part of the Uyghur's life, despite claims by the Chinese government to the contrary, said Ms. Kadeer.

The Muslim inhabitants of Xinjiang Province, also known as East Turkestan, have their own language, script, music and traditions.

A massive influx of Han Chinese into the Xinjiang region recently is threatening the culture and the livelihood of the Uyghur people who are becoming a minority in their own homeland.

“The real context for the unrest is six decades of repressive policies by a Chinese communist administration which has long sought to dilute Uyghur identity,” said Ms. Kadeer.

Discrimination and persecution in the region is open and carried out at a high level, said Margaret Taylor, spokesperson for Amnesty International.

The Uyghurs are banned from using their own language in the universities and Uyghurs looking for work are often met with signs saying “Uyghurs need not apply.”

Uyghurs cannot practice their religion openly and freely. Uyghur youth cannot enter a mosque to pray until they are 18 years old. “If you were caught praying, you could be suspended from school,” said Ms. Taylor.

The Uyghur leader welcomed the protest outside the venue in Auckland, saying that it was a sign of democracy.

Chinese protestors holding a banner "Rebiya is a terrorist" at the back of the room failed to perturb that Uighur leader. Constant loud and rude interruptions forced security personnel to issue a warning to the group.

“People, whether they agree with us or disagree with us, they should have the right to express their viewpoints,” Ms. Kadeer said.

The recent sentencing of Uyghurs to death, following from the ethnic unrest, will only lead to bigger problems, she said.

Ms. Kadeer said more Uyghurs were likely to be sentenced to death if the Chinese community "continued to turn a blind eye" to the problems in Xinjiang

“Our hope is for peaceful dialogue with the Chinese government to achieve self-determination for the Uyghur people,” she said.

Ms. Taylor said that by speaking out, the Uyghur leader was putting her people, her children and herself at risk.