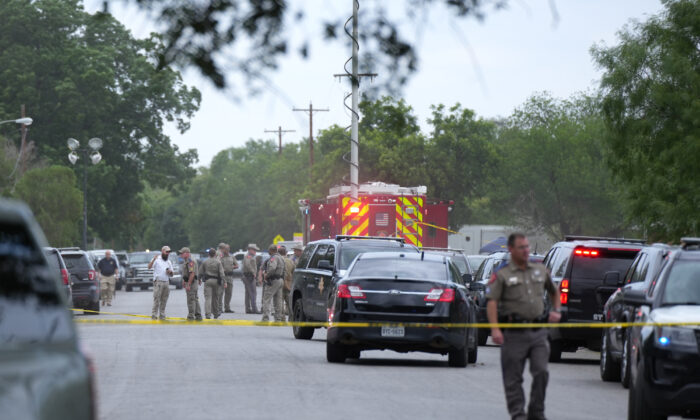 Police cordon off the streets around Robb Elementary School after a mass shooting in Uvalde, Texas, on May 24, 2022. (Charlotte Cuthbertson/The Epoch Times)
US News

UVALDE, Texas—Parents and children gripped each other a little tighter on May 24, knowing they were the lucky ones.

Mayor of Uvalde Don McLaughlin confirmed at 10:30 p.m. local time that 19 children and two adults were confirmed dead in the mass shooting at Robb Elementary School in Uvalde, Texas.

Joe Daniel, a Uvalde resident who lives near the school, said his 8-year-old daughter was traumatized after the gunman tried to get into her classroom, but the teacher locked the door.

Construction workers came racing into his house from next door as they heard gunfire. Salvador Ramos allegedly shot his grandmother before driving toward the school, entering the campus, and opening fire. Law enforcement officers shot Ramos.

Another man said his cousin’s child is still missing—they’d already called all the hospitals from Uvalde to San Antonio, and now they feared the worst.

It’s a small community, and word travels fast. One man showed The Epoch Times the Facebook page of one of the teachers who was shot. He knows her best friend.

“Every town’s got its criminals, [but] I didn’t think ours had one of those,” he said.

Moses, a retired truck driver who declined to give his surname, said he’d lived across the street from Ramos’s grandmother all his life.

“I’ve known her all my life. I can’t believe this happened,” he told The Epoch Times. Moses said she’s “real hardworking, real nice” and “kept her yard and her house really clean.”

Ramos’s grandmother is in critical condition.

Moses’s great-grandson was at Robb Elementary during the shooting, but he wasn’t injured. “But some who didn’t make it—I know their parents, their grandparents,” Moses said.

“It’s shocking. It’s hard to believe. The part I don’t understand is, maybe he and his grandma got into it, but what have little kids got to do with it?

Uvalde CISD Chief of Police Pete Arredondo said the priority was to get information to the families of the school children.

“As of now, we’re still working on this active investigation. Once we’re able to provide information to the families, we will do so first and foremost,” he said. “Let me assure you, the intruder is deceased. And we are not actively looking for another individual or any other suspects in this case.”

CISD Superintendent Hal Harrell said grief counseling would be provided at the local Civic Center starting at 10 a.m. on May 25, “for our students, our staff, community members, anybody that needs to come at that time.”

The Uvalde Police Department said the streets around the school would be closed for several days.

“To our community, we ask you to keep those affected in your prayers. Please be patient and understanding with the active scene and investigation,” the department posted on its Facebook page on the evening of May 24.

Texas Gov. Greg Abbott ordered flags in the state to be lowered to half-staff.

“Texans across the state are grieving for the victims of this senseless crime and for the community of Uvalde. Cecilia and I mourn this horrific loss and we urge all Texans to come together to show our unwavering support to all who are suffering,” Abbott said in a statement.

First responders from all over the region rushed to Uvalde to assist. Ambulances from Bandera County, Edwards County, and San Antonio were sitting next to Uvalde trucks. Local Border Patrol agents, sheriff’s deputies, and police officers from neighboring counties flooded in to help.

Uvalde, with a population of about 16,000, sits about 60 miles east of the U.S.–Mexico border and 83 miles west of San Antonio.