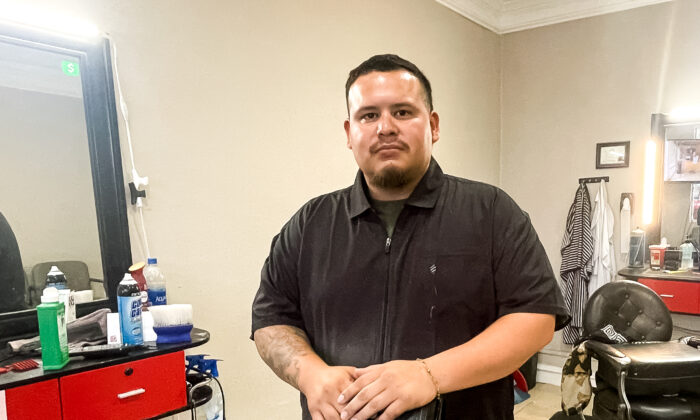 Steve Mena, owner of Official Cuts, in his barber shop in Uvalde, Texas, on May 31, 2022. (Charlotte Cuthbertson/The Epoch Times)
US News

UVALDE, Texas—Steve Mena, owner of a barber shop in downtown Uvalde, Texas, was about to cut Jacob Albarado’s hair when each of their wives contacted them about an active shooter at the local elementary school.

“At the same time he got a text message, I got a phone call from my wife, because we both have kids there,” Mena told The Epoch Times, seven days after the mass shooting tragedy that claimed 21 lives at Robb Elementary School.

“So we kind of reacted at the same time,” Mena said. Albarado, a Border Patrol agent, told Mena he was unarmed because he was off duty.

They could hear gunshots as they exited Mena’s Official Cuts barbershop, about a mile from the school. Albarado’s wife, a fourth-grade teacher at Robb Elementary, had texted: “There’s an active shooter. Help. I love you.”

While driving to the school, Mena was trying to wrap his head around it all.

“I was thinking to myself, this can’t be real. Not in Uvalde,” he said.

“You always hear about this stuff happening all over, you know, and I didn’t think it could happen in Uvalde because everyone’s so close to each other. It’s just so small here. This is the last place I’d expect it.”

The two men arrived at the school at about the same time, and Mena gave Albarado his Remington 870 pump-action shotgun, which he keeps in his truck, and some ammunition.

Albarado grabbed the gun and went directly toward the school, while Mena went around the security perimeter toward the funeral home, where children were being evacuated.

That’s when he saw his 10-year-old daughter exit the school.

“When I saw her come through the window, I just burst into tears,” Mena said. “It was so emotional because I just didn’t know what to think. So when I saw her come out and run toward the funeral home, I was like, ‘Oh, thank God.'”

His nephew was right behind her.

“I gave them a hug, and I told them I love them,” Mena said. Then, he had to let them go with their classmates to the Civic Center—he still hadn’t seen his 8-year-old son.

“I waited for my son, and that 20 to 30 minutes that passed was excruciating,” he said. Eventually, he found out that the second-grade children, including his son, had already been evacuated to the Civic Center.

“I’m very thankful. But at the same time, we’re still feeling for the parents that lost their loved ones. It’s tragic all the way around. So we’re just praying for everybody [and] doing as much as we can to give support.”

Mena said there’s a lot of anger in the community about the police response after it was revealed that Ramos remained inside the school for about an hour before he was fatally shot.

A Texas Department of Public Safety (DPS) official said the Uvalde school district chief of police made the “wrong decision” to not engage Ramos sooner.

“A decision was made on the scene—I wasn’t there—that this was a barricaded subject situation, there was time to retrieve the keys and wait for a tactical team with the equipment to go ahead and breach the door and take on the subject,” DPS Director Steve McCraw said on May 27.

“I don’t know what to say. There was no contact, and there were still kids at risk,” he said. “How many lives could have been saved? That’s going to be one of the biggest deals for these people.”

Mena said he started carrying the shotgun in his truck after the riots started in the summer of 2020 and he was frequently traveling to San Antonio.

“Protecting my family is really why I carry it. It’s not just to protect my family, but anybody that is in harm’s way,” he said.

“I’m not going to stand there and let something happen to somebody innocent and not respond.”