Petito's alleged final text message to her mother is revealed 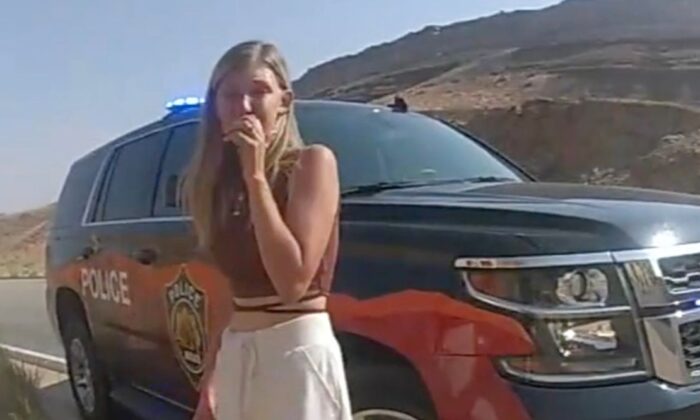 On Thursday, the Moab City Police Department released the footage of their interaction with Laundrie and Petito when they pulled over their vehicle near Arches National Park in Moab on Aug. 12.

“I have really bad OCD. I was apologizing to him saying I’m sorry I’m so mean,” Petito told the responding officer in the footage, referring to obsessive-compulsive disorder. “We’ve been fighting all morning. He wouldn’t let me in the car before … he told me I needed to calm down.”

Petito then sat in the officer’s squad car when he spoke with Laundrie.

Laundrie then told the officer, who wasn’t named, that Petito “just gets worked up sometimes, I try to distance myself from her. I locked the car.”

Neither Laundrie nor Petito, 22, made the 911 call to report the domestic disturbance, according to a police report obtained by the New York Post.

“The male tried to create distance by telling Gabbie to go take a walk to calm down, she didn’t want to be separated from the male, and began slapping him,” the police report said. “He grabbed her face and pushed her back as she pressed upon him and the van, he tried to lock her out and succeeded except for his driver’s door, she opened that and forced her way over him and into the vehicle before it drove off.”

And the officer, in his report, wrote that he initially believed that “the male had been observed to have assaulted the female” but later said, “No one reported that the male struck the female.”

One of the responding officers wrote that he would characterize it more “as a mental/emotional health ‘break’ than a domestic assault” and “no significant injuries” were reported, according to Fox News. The report said that Petito stayed in the van that night, while Laundrie stayed in a hotel.

On Wednesday, Petito’s mother, Nichole Schmidt, told news outlets that she obtained a text message from her daughter’s phone on Aug. 30.

“No service in Yosemite,” the message read, referring to the California national park. But Schmidt told the New York Post that she doesn’t believe that text was sent by her daughter.

“I do not believe the text on August 30th was from my daughter,” Schmidt told the New York Post, saying: “The van was in Florida on the 1st [of September]. I think I can do the math.”

North Port Police Chief Todd Garrison told news outlets that Laundrie has been uncooperative with authorities in their investigation. Laundrie has not been charged with a crime.

“As a father, I can imagine the pain and suffering Gabby’s family is going through. We are pleading with anyone, including Brian, to share information with us on her whereabouts in the past few weeks. The lack of information from Brian is hindering this investigation,” he said.