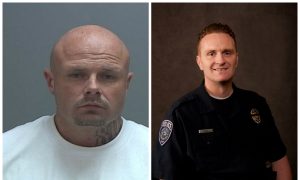 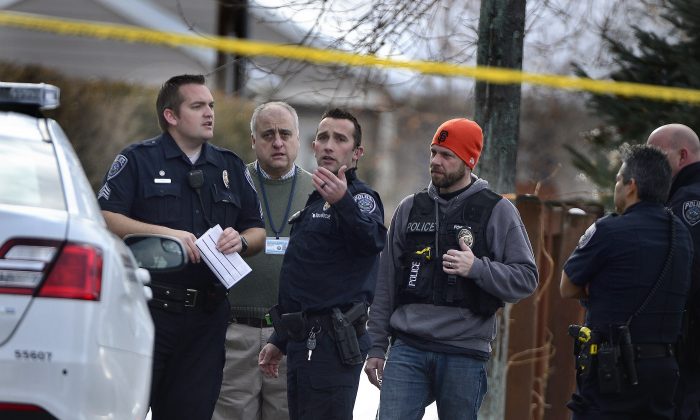 Police talk at the scene of an officer-involved shooting, in Holladay, Utah, Sunday, Jan. 17, 2016. Utah police officer Douglas Barney was killed Sunday, after he was shot by a suspect who was later killed by police. (Scott Sommerdorf/The Salt Lake Tribune via AP) DESERET NEWS OUT; LOCAL TELEVISION OUT; MAGS OUT; MANDATORY CREDIT
US

SALT LAKE CITY—A Utah police department is grieving for a fellow officer slain while working overtime to pay for his cancer treatments amid questions about why his shooter was on the streets in the first place, despite a long rap sheet.

Officer Douglas Scott Barney, of Unified Police of Salt Lake County, was killed Sunday after coming across Cory Lee Henderson, who later died in a shootout with other officers.

Henderson, 31, had walked away from a state-run parolee drug treatment center last month. It was his latest cycle through federal prisons and halfway houses as he faced multiple gun and drug-related charges over the past decade.

Gang investigators had tracked him to a Salt Lake City suburb Friday night, but missed capturing him, said Lt. Lex Bell of the Unified Police.

Henderson had run a red light and crashed a car Sunday, then walked away. Barney, 44, who was responding after the crash, was found shot in the head, his gun still in the holster.

The father of three teenagers was working an overtime shift he’d taken to help pay off debt from his bladder cancer treatments. He had been a police officer 18 years.

Henderson also shot one of Barney’s partners through both legs before he was killed. Officer Jon Richey, 51, was released from a hospital on Tuesday after his wounds were treated.

Officers didn’t know Henderson was a fugitive until hours after the shooting, Bell said. Police are often frustrated to see violent offenders out of jail weeks after arrest, he said.

“We’ll risk our life to find somebody. A month or two later, they go back on the street,” he said.

Henderson was released from prison on parole in April after serving a 14-month stint on a gun charge, but he violated his parole a two months later and a warrant went out for his arrest, court records show.

He was picked up on drug and firearm charges in October. For the parole violation, Utah’s parole board sentenced Henderson to two months in prison followed by a stint at a state-run drug treatment center. The board did not know federal prosecutors planned to file new charges against him.

A new state law designed to put more drug offenders into treatment prevented the board from giving him a longer prison sentence, said Greg Johnson with Utah Board of Pardons and Parole.

Henderson told his parole officer that he wanted to try the state treatment center because it works to get inmates jobs and housing, in addition to drug treatment.

“I feel like I need a little more structure,” Henderson said, according to an audio recording of the parole hearing.

Federal prosecutors filed their drug and firearm charges in late November. He appeared before U.S. Magistrate Judge Evelyn Furse the following month, while he was still living at the drug treatment

Prosecutors said that might not be the best place for him, noting that he had violated supervised release at least 10 times in the past.

Furse acknowledged those concerns but said the treatment center sounded like a good opportunity, and decided to keep him there as he awaited trial.

Within 10 days, Henderson checked out to look for work and never came back.

He was with a woman during the Sunday car crash. She has since talked to police, but wasn’t arrested or publicly identified si

nce she could be a witness. She wasn’t with him at the time of the shooting, police said.

Police are planning a candlelight vigil to honor Barney and Richey for Wednesday, and Barney’s funeral is set for Monday.

Some 10,000 people are expected at the funeral for one of the first officers in the country to die on duty this year, and the first ever for the Unified Police Department since it formed in 2010 to serve communities in the Salt Lake City area.

Bell had worked closely with the slain officer and said the two shared Twizzlers candy and their memories of their first patrol jobs last week. Even people he put in handcuffs appreciated Barney’s sense of humor, his colleague said.

“He’s got them laughing before they ever go to jail,” Bell said.