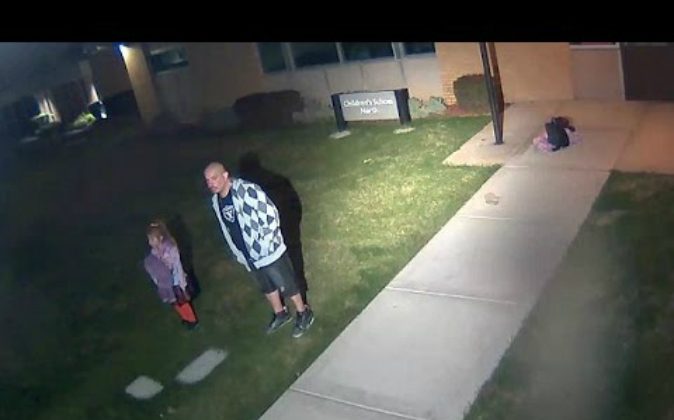 Adrian Sanchez is facing a felony charge of child abuse by abandonment after he left his daughter alone on a Utah college campus on Oct. 9 (YouTube)
Crime and Incidents

A Utah father is facing a felony charge of child abuse by abandonment after surveillance cameras captured him leaving his 5-year-old daughter alone on a local college campus.

Adrian Justin Sanchez, 41, was seen leaving Acelynn Sanchez on the campus of Ogden-Weber Applied Technology College at around 5:00 a.m. on Oct. 9. The young girl who had made a makeshift bed with blankets was found by a security guard at around 7:30 a.m., when temperatures had plummeted to 39 degrees.

Police said she was crying and hurt after she scrapped her knee and hand while running toward the security guard. Sanchez was arrested on Oct. 21.

According to the girl’s mother, Gena Weaver, Sanchez told their daughter “to shut up, and lay down and go to sleep,” reported Fox 13 Salt Lake City. Weaver said the incident has left the girl traumatized.

“She’s very strong and brave, she holds a smile when she’s around other people, but when she’s home, she breaks down,” Weaver told Inside Edition. “She doesn’t want to be in any room by herself. She has to be by our side. Before, she was sleeping in her own bed in her own room. Now, she sleeps in my bed every night.”

The incident began when Sanchez came to pick up Acelynn from Weaver’s home on Saturday night, stating he wanted to “go out to eat at Chili’s.” Those plans never came to be, instead he reportedly took the girl to his mother’s home—where he also resides—and told his mother that he wanted to take Acelynn to a house nearby, where he allegedly planned to partake in drug activity. The grandmother declined, which angered Sanchez.

“He wanted to take her to a bad place, a place where he goes and does drugs,” Weaver said. “So he tore up [his mother’s] room. When she woke up that morning, she noticed he and Acelynn were gone.”

KUTV reported that Sanchez left with his daughter in the early morning hours and made several attempts to break into two different homes. When that failed, he took her to a relative’s home and instructed her to sleep on the lawn, which she refused. It is then he decided to take her to the college campus.

Acelynn told the security guard and police officers that her father had left her on the campus while he sought their missing dog. He allegedly told her that he was watching her and she should not follow him.

Sanchez—who has since been released on bail—refused to talk to authorities while he was in custody.

“We would have like to have asked those questions—why you left a five-year old at the campus, unattended, without a parent, in the early morning hours,” Lt. Tim Scott said. “He wasn’t able to provide that for us. He wasn’t cooperative with investigations.”

Weaver said she was disappointed that Sanchez was already released from jail, adding that she intends to terminate his parental rights and take out a protective order against him.

“I’m scared for my daughter,” she said. “I’m going to do whatever it takes to protect her.”