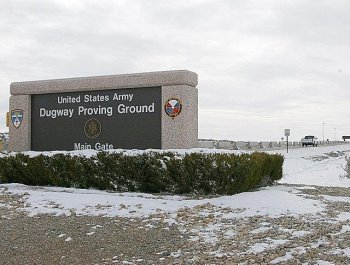 Utah Lockdown: The lockdown at the US Army's Dugway Proving Ground in Utah ended Thursday morning, according to reports. In this 2001 photo, a a truck approaches the main gate of the base. (George Frey/AFP/Getty Images)
US

Robin Kemker
View profile
Follow
biggersmaller
Print
The lockdown ended Thursday morning at a biological and chemical weapons testing facility in Utah. Local talk radio station KSRO reported that there were no injuries, and the base opened its gates to let personnel come and go. The cause has still not been revealed. The US Army Dugway Proving Ground was put into a lockdown at 5:24pm on Wednesday, Jan. 24. The day shift was not allowed to exit the base, nor was the following shift allowed to enter the gate. Apparently, according to several local reports, 1,200 to 1,400 personnel remained on base for ‘an ongoing security operation.”

According to the Deseret News, Dugway Proving Ground Commander Col. William E. King, IV, said food and beverages were delivered to the people inside. "As you know measures like these (lock down of our gates) are not taken lightly," he said. "No one is in immediate danger but these steps are required." King said he would open the gates "as soon as I can."

The base’s vision statement is “Rendering Danger from Chemical/Biological Agents Irrelevant.” Testing remains a main focus of the base according to the base’s website, “The present day Dugway Proving Ground now covers 798,214 acres. In addition to chemical and biological defensive testing, environmental characterization, and remediation technology testing Dugway is the Defense Department’s leader in testing battlefield smokes and obscurants. Testing now includes further determining the reliability and survivability of all types of military equipment in a chemical or biological environment.”

The base was the repository for many chemical/biological warheads over the years and leakages occurred from time to time in storage bunkers or during the decommissioning of the munitions. Most of these munitions have been disabled and the contents rendered inert or disposed.