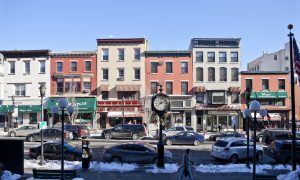 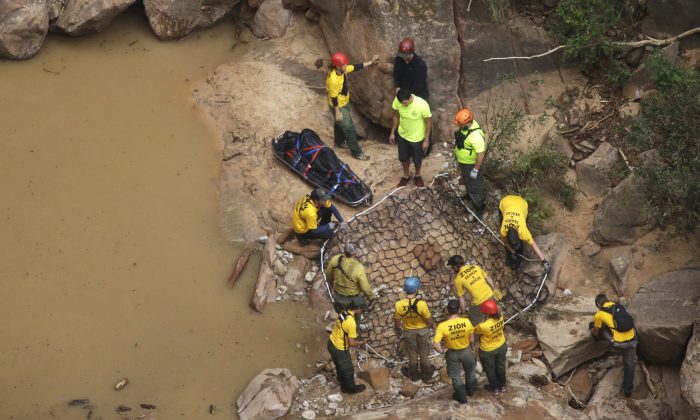 Search and rescue team members place a litter in a net for helicopter transport after finding a body in Pine Creek on Wednesday, Sept. 16, 2015, in Zion National Park, near Springdale, Utah. (AP Photo/Rick Bowmer)
US

Death Toll From Flash Flooding in Southern Utah Rises to 19

ZION NATIONAL PARK, Utah—The death toll from flash floods that ripped through southern Utah reached 19 on Thursday after searchers found the final body from a group of seven hikers that were trapped in a narrow canyon in Zion National Park.

At least 12 others, including nine children, died Monday in a nearby town on the Utah-Arizona border when two cars were swept downstream by the raging waters. Search teams were still looking for a missing 6-year-old boy.

Park officials have not released the identities of the seven victims, six from California and one from Nevada. But the Ventura County Sheriff’s Department in Southern California said one of the dead is Sgt. Steve Arthur, 58.

Arthur’s family told the department that he had been confirmed dead, and his wife, Linda Arthur, was on the trip and remained missing, sheriff’s Capt. John Reilly said.

“Steve was known for his tireless efforts working with local youth both on and off duty and possessed a huge compassion for humanity,” the department said in a statement.

The couple were in a group that, like thousands before them, were attracted to the majestic slot canyons of the desert Southwest by unique geological quirks, which also make them deadly.

The curved, narrow sandstone walls glow in the sun with a cathedral-like light. When it rains, however, they can fill with raging rain water in an instant, leaving people with no escape.

That’s exactly what happened Monday evening when the group became trapped by floodwaters in Zion’s popular Keyhole Canyon. The canyon is as narrow as a window in some spots and several hundred feet deep.

“That little bit of rain can turn what was a very comfortable daylong excursion into a horror story, literally in a split second,” said Colorado-based canyoneering expert Steve Allen.

The flood marks one of the deadliest weather-related disasters at a national park in recent history, park service officials said. It evoked memories of a 1997 incident near Page, Arizona, where 11 hikers died after a wall of water from a rainstorm miles upstream thundered through Lower Antelope Canyon, a narrow, twisting series of corkscrew-curved walls located on Navajo land.

Outdoor enthusiasts are attracted to slot canyons by what Allen calls “eye candy” created by nature. Water flows through cracks in the earth and gradually erodes the sandstone underneath, leaving caverns narrow enough for hikers to touch the sides when they stretch out their arms.

Adventure-seekers also get a rush from the combination of rock climbing, swimming, hiking and cave exploration, all in a setting totally different from the surrounding desert, Allen said.

The Keyhole Canyon at Zion in southern Utah where the hikers were killed is what canyoneers call a “rap and swim” canyon, full of a series of drops where hikers rappel down into pools of water, Allen said. It’s considered an entry-level canyon for people who have some experience but are still new to the sport.

Zion spokeswoman Aly Baltrus said some members of the group were new to canyoneering, but they took a class to prepare.

This group was already in the canyon when a flash flood warning led park officials to announce they were closing their canyons. By that time, park officials say, there was no way to alert them to the violent floodwaters coming their way.

“Ninety percent of Zion is wilderness,” park ranger Therese Picard said. “It is not possible to contact everyone.”

He said Keyhole Canyon is one of the shorter, more popular routes at Zion National Park, mostly attracting hikers and canyoneers but not the average tourist.

“The big lure to any slot canyon is just incredibly beautiful scenery. You’ve got narrow walls around you. When the sun shoots through at the right angle, you’ve got all these glowing walls,” Braun said. “It’s just a completely magical place.”

As canyoneering has grown in popularity since the 1990s, it’s also attracted more people who are new to it. Many slot canyons are deceptively easy to enter, luring in people who find themselves trapped in a disaster, Allen said.

At Zion, the forecast can be unpredictable, and visitors don’t have cellphone service shortly after leaving the visitors center, where they pick up permits for the trip.

Braun said he believes the National Park Service did everything it could to warn about the weather. Placing ladders or rescue ropes within the slot canyons would be impractical because of the remoteness of the canyons and their size, he said.

Allen said there are scant options to bolster alerts. A siren system might work, but it would also pierce the tranquility of the entire park often, perhaps every day during monsoon season.

Experienced canyoneers constantly look for escape routes and opportunities to move to high ground if the need arises, Braun said.

But anyone would have had a hard time escaping the flooding.

“They just went in at a bad time,” Braun said. “The canyon is so narrow, there’s no way to get out of certain sections of it. When the rain hits and the flood starts coming in, there’s no hope for anyone.”