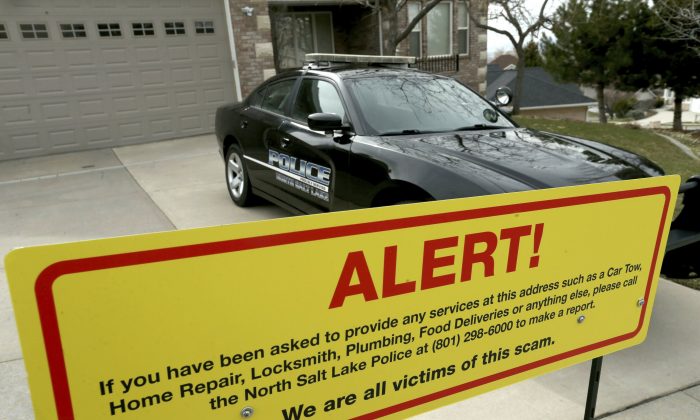 A warning sign and a police officer's vehicle are stationed at Walt Gilmore's home on March 21, 2019. (Laura Seitz/The Deseret News via AP)
US News

SALT LAKE CITY—A Utah family that says it has been inundated with hundreds of unwanted service providers unwittingly sent to their home over the past seven months has a court-ordered protective injunction against a man in Hawaii, but police have yet to arrest him and won’t say if he’s a suspect.

North Salt Lake Police Sgt. Mitch Gwilliam acknowledged on March 27 that the Jan. 28 injunction granted by a Utah state judge is related to the case, but said he can’t comment about whether Loren Okamura of Honolulu, Hawaii, is a suspect, citing an ongoing investigation. Nobody has been arrested.

The hoax texts and phone calls that appear to come from Walt Gilmore and lead people to his house in the quiet, middle-class neighborhood in a Salt Lake City suburb have not stopped since the protective order was issued Jan. 28, directing Okamura not to contact the family, Gilmore and Gwilliam said.

Details of the injunction request are sealed court documents, but Judge James Blanch said in his order he found reason to believe that Okamura had stalked the Gilmores.

Okamura didn’t return a phone call seeking comment or answer at an address listed for him in Honolulu.

Gwilliam said investigators in Utah haven’t ruled out the possibility that more than one person is responsible. They are in contact with police in Honolulu and elsewhere as part of an investigation he said detectives hope will be concluded soon.

Sandra Yi Barker, FBI spokeswoman in Utah, said she couldn’t confirm or deny if the agency is investigating the case.

It’s unknown why the Gilmores are being targeted or what if any relationship exists between Okamura and the Gilmore family. Gilmore told The Associated Press on Tuesday he can’t discuss why a protective order was sought against Okamura but he is sure the extreme stalking is not random.

He said the stalker uses phone calls and texts to send people to his home for legitimate services and illegal activities. He estimates about 500 people have knocked on his door since August.

People have arrived saying they were called to provide electrical, plumbing, tree-trimming, and towing services, Gilmore said. Some have arrived in the middle-class neighborhood for illegal purposes including drugs and prostitution.

This week, two teenagers who had driven from Idaho arrived at the house to sell Gilmore fishing equipment for more than $100 per an agreement made on an online classified ad site, he said.

Last weekend, he said a man with a health condition arrived to be driven to Portland after Gilmore supposedly responded to a Craig’s List ad seeking someone to help him make the drive.

“He was really upset,” Gilmore said. “He needed someone to drive with him.”

Two prostitutes arrived in the neighborhood in recent weeks before realizing they had been hoaxed. One woman emerged from a cab wearing little clothing and smoking a cigarette, said Gilmore, who lives at the house with his wife, some adult children and grandchildren.

“It’s scary to know the type of people who are in our neighborhood,” Gilmore said.

A police car is now parked outside around the clock and Gilmore has put up a large yellow sign in the driveway with “ALERT” in big red letters. Below it says, “If you have been asked to provide any services to this address such as a car tow, home repair, locksmith, plumbing, food deliveries or anything else, please call the North Salt Lake Police.”

And at the bottom in bold letters: “We are all victims of this scam.”

Gilmore said he hopes an arrest is made soon.

“He’s a con man to the nth degree,” Gilmore said. “This is something that no family, no person or neighborhood should have to endure, this type of abuse for seven straight months. The law should look at that and divvy out equal justice.”