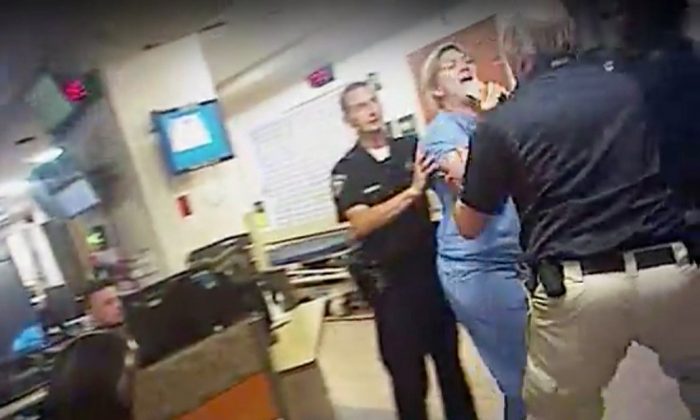 The Utah police detective who was filmed dragging a screaming nurse out of a hospital because she refused to draw blood from a patient was fired from his job.

A spokesman for the Salt Lake City Police confirmed to The Associated Press that police chief Mike Brown made the move to fire Detective Jeff Payne after an internal investigation.

Payne dragged a nurse out of the University of Utah Medical Center in Salt Lake City after she told him that she couldn’t draw blood from an unconscious patient. Alex Wubbels, the nurse, said the officers needed a warrant or the patient’s consent to draw blood.

He then told her that he would “leave with blood in vials or body in tow” before he handcuffed her and took her out of the hospital—while she screamed.

The patient in the case wasn’t a suspect. He was an off-duty reserve police officer from Idaho who was driving a truck when he was hit by a suspect fleeing police in a high-speed chase. A video of the incident showed the fiery crash.

Payne also worked for an ambulance company, and he was fired from that job several weeks ago.

SLC Police Chief fires Jeff Payne, who assaulted & arrested a nurse for not giving him a crash victims blood sample.https://t.co/wa4ykIB1i0

“The decision by Chief Brown in the UMED blood draw incident is in keeping with the high level of accountability we owe the people of Salt Lake City, and is a decision which can be upheld under further scrutiny,” she said. “In making his decision I am confident Chief Brown balanced the unique stresses each of our police officers deal with daily, and the responsibility they have as leaders in our community.”